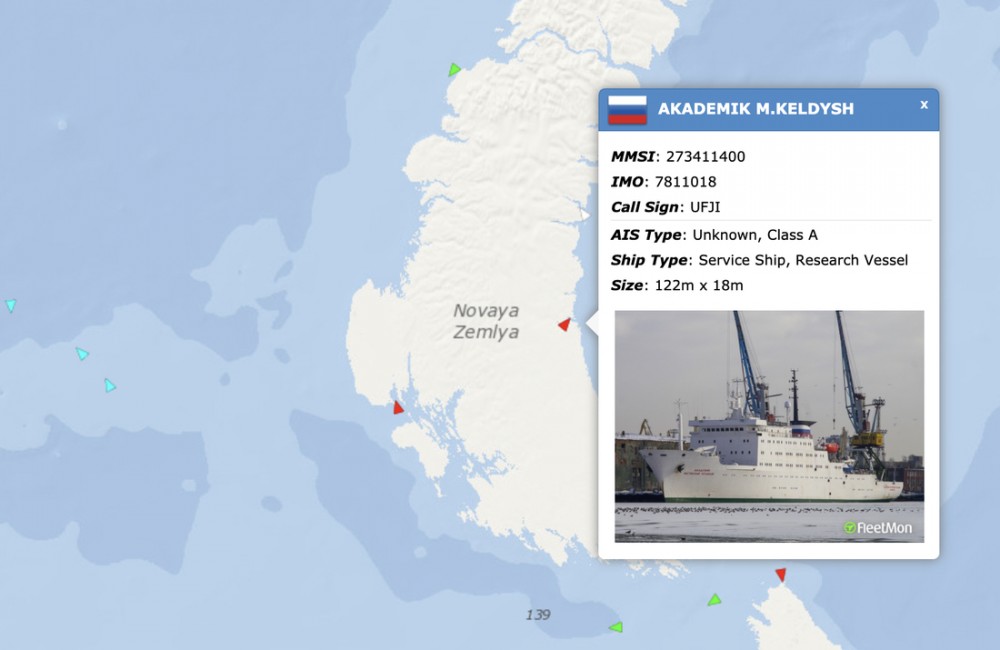 Currently in the Abrosimova Bay on the east coast of Novaya Zemlya, the "Akademik M. Keldysh" is a Russian research vessel carrying submersibles and sonars. Screenshot from exactEarth ShipView

A Russian research expedition has rediscovered the location of the container with two damaged reactors from the Soviet navy submarine K-19, dumped in Ambrosimova Bay in 1965.
Read in Russian | Читать по-русски
By

“Having the exact coordinates for the dumped container with the reactors from K-19 is undoubtedly good news,” says nuclear safety expert Andrey Zolotkov with ANO Bellona (Murmansk).

Zolotkov hopes for risk assessments to be carried out soon with the aim to see how the reactors could be lifted out of the maritime environment and brought to a yard for safe decommissioning.

“Risks of lifting the reactors can only be discussed after obtaining additional data, like seawater samples and radiation examination of the container and its technical condition,” Zolotkov says in an online conversation with the Barents Observer. He underlines that more than 50 years have passed since the dumping.

News agency RIA Novosti was first to report about the research expedition’s findings.

In the so-called “White Book” on dumped nuclear objects, originally published by President Boris Yeltsin’s environmental advisor Alexei Jablokov, the dumping of the submarine’s two reactors is listed for the Abrosimova Bay on the east coast of the Kara Sea, but exact location hasn’t been confirmed.

It was this week the crew on “Akademik M. Keldysh” with the help of sonars and submersibles found the container. Both marine researchers, oceanology experts from Russia’s Academy of Science and representatives of the Ministry of Emergency Situations are working together in the expedition team.

K-19 is one of the most infamous nuclear-powered submarines sailing for the Soviet navy’s Northern Fleet. In July 1961 the reactor lost coolant after a leak in a pipe regulating the pressure to the primary cooling circuit. The reactor water started boiling causing overheating and fire. Crew members managed to extinguish the fire but had big problems fixing the leak in an effort to save the submarine from exploding. Many of them were exposed to high doses of radioactivity before being evacuated to a nearby diesel submarine sailing in the same area of the North Atlantic.

Eight of the crew members who had worked on the leak died of radiation poisoning within a matter of days.

The submarine was towed to the Skhval shipyard (No. 10) in Polyarny. Later, the reactor compartment was cut out and a new installed. The two damaged reactors, still with spent nuclear fuel, were taken north to the Kara Sea and dumped. Keeping the heavily contaminated reactors at the shipyard was at the time not considered an option.

Andrey Zolotkov hopes for the reactors to be recovered.

“Now, as Russia holds the chair of the Arctic Council, expeditions like this bring us closer to the topic of raising the potentially most dangerous nuclear objects from northern waters,” he says.

This spring, Russia’s Foreign Ministry invited international experts from the other Arctic nations to a conference on how to recover sunken radioactive and hazardous objects dumped by the Soviet Union on the seafloor east of Novaya Zemlya. Moscow chairs the Arctic Council for the 2021-2023 period.

The two reactors from the K-19 submarine are not the only objects posing a risk to marine environment. In fact, no other places in the world’s oceans have more radioactive and nuclear waste than the Kara Sea.

Reactors from K-11 and K-140, plus the entire submarine K-27 and spent uranium fuel from one of the old reactors of the “Lenin” icebreaker are also dumped in the same sea.

While mentality in Soviet times was «out of sight, out of mind», the Kara Sea seemed logical. Ice-covered most of the year, and no commercial activities. That is changing now with rapidly retreating sea ice, drilling for oil-, and gas, and increased shipping.

Additional to the reactors, about 17,000 objects were dumped in the Kara Sea in the period from the late 1960s to the early 1990s.