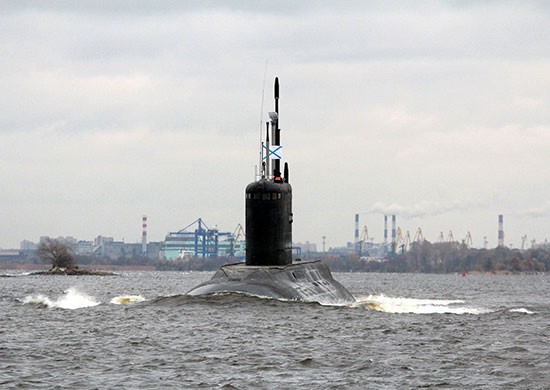 The new diesel-electric sub "”Rostov-na-Donu” is part of the Russian Black Sea Fleet, but has undergone training in the Northern Fleet. Photo: Mil.ru

The Russian diesel-powered submarine ”Rostov-na-Donu” was on its way from the Kola Penisula when it today lauched cruiser missiles against terrorists in Syria.

The vessel was firing missiles type Kalibr on Rakka, the key IS town in Syria. It is the first time that Russia is applying this kind of armament on the extremists. It was a response to the recent shoot-down of a Russian airliner over Sinai, Egypt, RBC.ru reports.

As previously reported by the Independent Barents Observer, the “Rostov-na-Donu”, left the Northern Fleet on October 16 after finishing tests. The ship shortly had to return to the Baltic Sea due to technical problems.

The submarine was on its way to the Crimea where it is part of the Russian Black Sea fleet.

Along with two other submarines of the Varshavyanka-class, the “Rostov-na-Donu” had been several months in the Russian Arctic to engage in training. During the stay, the crew had been based in Polyarny on the Barents Sea coast engaging in deep-water tests, torpedo firing and firing of “Kalibr” cruise missiles.

The ”Rostov-na-Donu” is built and delivered by the Admiralty Yard in Sankt Petersburg in December 2014.

The Black Sea Fleet will get six submarines of the Varshavyanka class. The three first have already been delivered, while the fourth will be delivered in November 2015, and the fifth and sixth in November 2016.

The submarine is armed with 533 mm torpedoes and Kalibr cruise missiles, which can destroy surface targets at a distance of up to 300 kilometers.