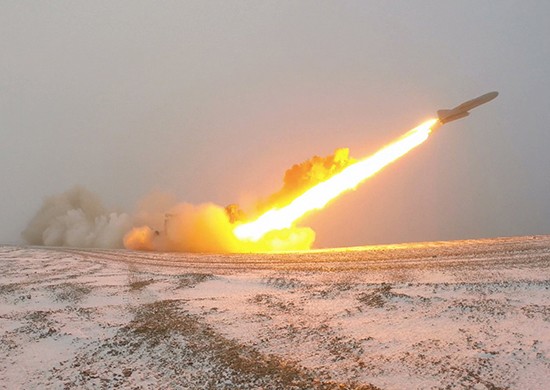 The new military complex at the island of Kotelny shows what it is made of.
Read in Russian | Читать по-русски
By

Also two strategic bombers type Tu-95 and two Tu-142 are reported to have taken part in the drills.

«This once again shows that the Northern Fleet is capable of carrying out assignments to protect the archipelagos and sea coast of the Russian Arctic», Northern Fleet Head Commander Nikolay Yevmenov says.

At the same time, he underlines that the rehearsal is conducted «in strict coherence with the principles and norms of international law» and that it is «not aimed at any third country with interests in the Arctic Ocean».

The rehearsal took place as a flotilla of Northern Fleet vessels arrived to the new base located in the Russian east Arctic. The flotilla, headed by destroyer «Vice Admiral Kulakov», includes four vessels and left Northern Fleet headquarter of Severomorsk in late August. Among them is the new weapons transportation ship «Akademik Kovalyov».

On their way to Kotelny, the Northern Fleet vessels have visited several sites. They have also engaged in drills near industrial facilities in the region, among them the Prirazlomnaya oil platform.