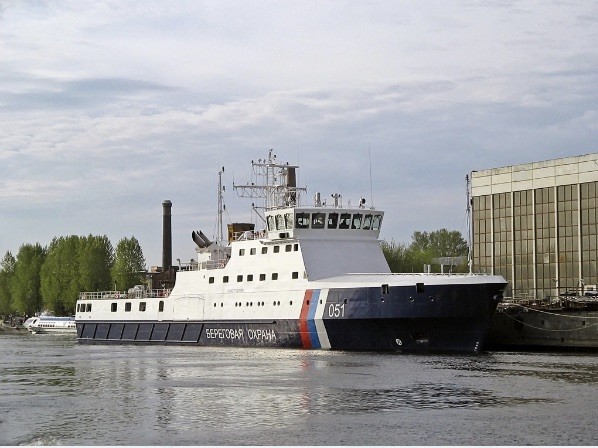 It will be based in Murmansk, ready for duty in Arctic waters from late 2018.
Read in Russian | Читать по-русски
By

The ship of the Purga class (project 22120) is to be built at the Almaz shipyard in St. Petersburg. It will have a price tag of almost 1,8 billion rubles (€26 million), Interfax reports.

The Purga-class is 71 meter long and 10 meter wide ships. It has a maximum speed of 24 knot and can operate autonomously for up to 20 days. Another two Purga class ships are under construction, both of them to serve in the Russian far east.

The Federal Security Service (FSB) is also in the process of getting a renewed fleet of smaller, fast-going patrol boats, as well as a new vessel of the long-time proven Svetlyak-class patrol vessel. In addition, it will receive at least two types of ice-going vessels designed for operations in the Arctic. The first vessel of project 22100 Okean-class ice-going patrol vessels, “Polyarnaya Zvezda” this year underwent sea trials in the Baltic Sea. Vessels of this class can break up to 80 cm thick ice. The two next vessels of this class are expected to be laid down in 2015, and should be ready for service in 2019.

The new vessels are built as the FSB is strengthening its role in Russian Arctic waters. A bill signed this summer gives the security service the full prerogatives for law enforcement along the Northern Sea Route.

With the powers formalized, the FSB will autonomously be able to take action against ships operating along the Russian Arctic coast.

The FSB includes both the Coast Guard and Border Guard services.