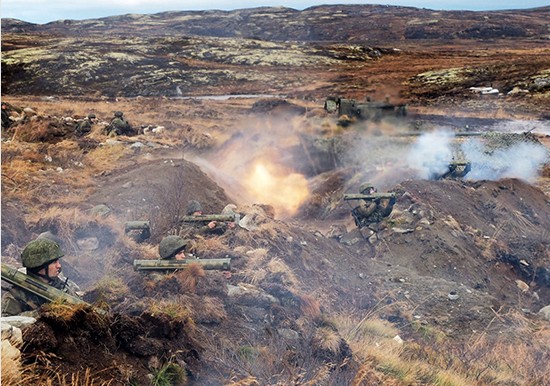 About 5,000 men were taking part in drills in Pechenga. Photo: mil.ru

In a show of force, the Northern Fleet’s land and coastal units took full use of their powerful arsenal during this week’s exercise near border to Norway.
Read in Russian | Читать по-русски
By

The drills were conducted jointly by the Northern Fleet’s land and coastal forces and held in Pechenga, just few kilometers from the border to Norway and Finland.

In the exercise, the Naval infantry acted as the attacking part, while the motorized units were the defenders

More than 5,000 soldiers and 500 armored tanks and vehicles took part in the drills.

It is not clear whether also the units from Alakurtti, the 80th Independent Motor Rifle Brigade, are taking part of the drills. The Alakurtti forces are a core part of Russia’s new Arctic Brigade. The brigade has an estimated 3,000 men.