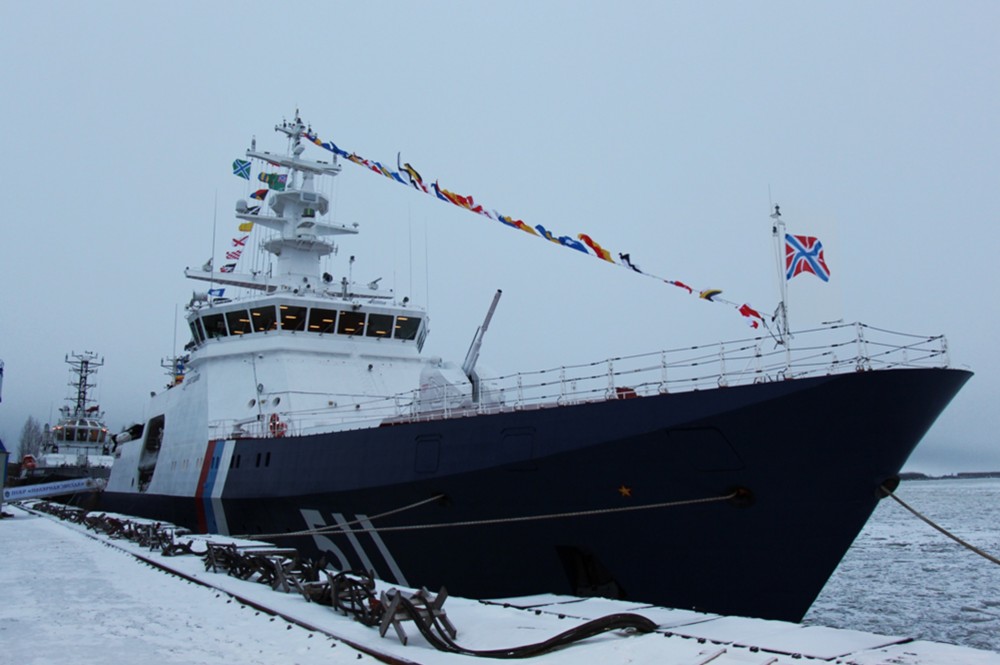 It can sail autonomously in Arctic waters for up to two months and break through 80 cm thick ice.
Read in Russian | Читать по-русски
By

In an official ceremony on the Murmansk waterfront, the top brass of the regional FSB assembled to greet the inclusion of new border patrol vessel «Polyarnaya Zvezda» (Polar Star) in the fleet of the security service.

«On this most powerful vessel in the FSB’s west Arctic division lies a special mission», Murmansk Deputy Governor Igor Babenko said in the ceremony.

«Stay faithful to the glorious tradition of the maritime border guards», he underlined to the crew, a press release reads.

The «Polyarnaya Zvezda» is 93 meters long, 15 meter wide and has a deadweight of 3,200 tons. It has a top speed of 20 knots and can operate autonomously for up to 60 days.

The vessel is built by the Zelonodolsk yard in Kazan, the Tatar capital in the Volga region. It was sent through Russian river ways to Kronstadt near St.Petersburg in May 2015. Construction of the ship started in year 2012.

The «Polyarnaya Zvezda» is the lead ship of Project 22100.

«The main asset of the vessel it its unique navigational-tactical complex and electro-powered engine, which allows it to save fuel on low speed», the shipyard writes on its website.

The new ship comes as the FSB strengthens its role in law enforcement in Russian Arctic waters. A bill signed by President Putin in June 2016, gives the FSB the full prerogatives for law enforcement along the Northern Sea Route.