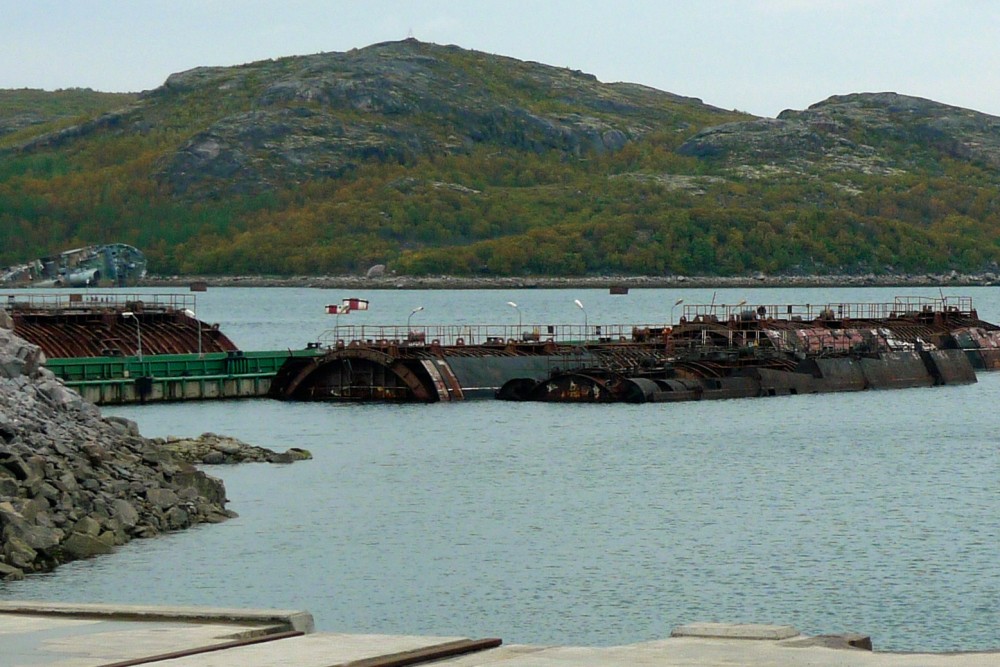 After a submarine is cut up for scrap, the radioactive compartments containing the reactors are stored afloat awaiting funding for onshore storage. Most compartments hold two reactors each. Photo: Thomas Nilsen

15 more Cold War sub reactor compartments to be taken on-shore and secured at the long-term storage complex in Saida Bay.
Read in Russian | Читать по-русски
By

The compartments, containing hundreds of tons of radioactive scrap metal, are today floating at piers just near the storage complex on the Barents Sea coast.

Floating in the sea, the compartments are today exposed to harsh weather conditions, especially during winter.

Some 100,000 m3 of solid radioactive waste will be stored in Saida Bay, mainly naval waste from Andreeva Bay, Gremikha and Severodvinsk. Located at 69 degrees north in the Murmansk region, the long-term storage site is the world’s northernmost.

According to a 2014 overview by a Russian participant delivered at a workshop of the Contact Expert Group for Nuclear Legacy Initiatives in the Russian Federation, the 30 reactor compartments that were afloat in Saida Bay had a weight of 820 tons. Since then, some 15 compartments are lifted onshore. Assuming the remaining compartments are of similar size, the weight would be around 400 tons.

Saida Bay storage and treatment complex for radioactive waste is financed with a €600 million grant from Germany as part of the G8 Global Partnership Against the Spread of Weapons and materials of Mass Destruction.

Describing the complex in a meeting with President Vladimir Putin earlier in January, Murmansk Governor Marina Kovtun said it “is unique in the world today with regards to technology and safety.”

During Cold War, two-thirds of all Soviet nuclear powered submarines were based with the Northern fleet along the coast of the Kola Peninsula. Some 130 of the 150 nuclear submarines were taken out of operation by the end of the Cold War and are now decommissioned.