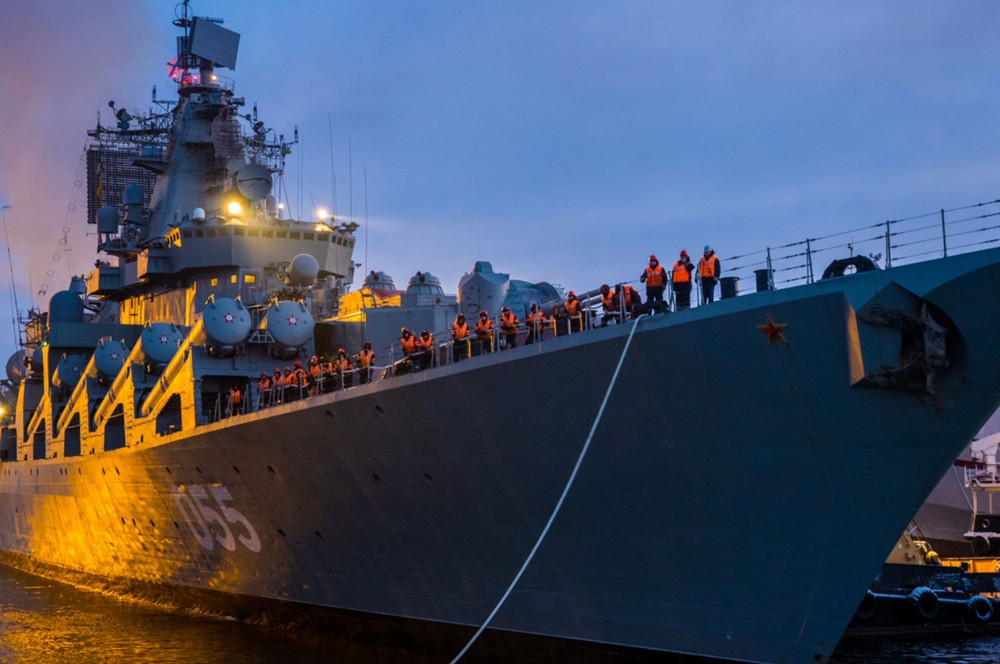 The powerful Northern Fleet vessel engages in shooting exercises off the coast of the Kola Peninsula.
Read in Russian | Читать по-русски
By

It took years to get the Soviet-era ship fit for fight in Arctic waters. In April, the «Marshal Ustinov» was officially declared ready for action. According to the Northern Fleet, the ship crew has now completed the necessary full cycle of basic training and weaponry and technical equipment has been controlled and approved.

In mid-May, the ship set out to sea from Northern Fleet headquarters Severomorsk for a first shooting exercise. Artillery complexes AK-130 and AK-630 were firing on mobile targets imitating enemy ships. In the air were aircrafts Il-38 and helicopters Ka-27 taking part in the training, the Northern Fleet informs in a press release.

Few days later, the ship was again at sea, this time in a joint exercise with big assault landing ship «Aleksandr Otrakovsky». With representatives of the Military Academy of the General Staff watching, the two ships executed shooting with missiles and artillery together with Northern Fleet air force.

The 186 meter long, 11,280 ton heavy «Marshal Ustinov» was first included in the Northern Fleet in 1986. In the period from 2011 to 2016 it was docked at Zvezdochka, the yard in Severodvinsk, northern Russia, for upgrades.

Since the destroyer came to Severodvinsk in 2011, the yard has repaired the ship’s gas turbine generators and engines, as well as general vessel systems and radio-electronic armament.

The «Marshal Ustinov» is one of Russia’s three Project 1164 (Slava-class) vessels. It was included in the Soviet Navy in 1986. With its powerful Bazalt missile system, the ship is among the most powerful in the Russian Navy. It also holds a wide range of other weaponry among them eight S-300F rocket complexes and two Osa-MA complexes, as well as a 533 mm torpedo system, two RBU-6000 Smerch-2 rocket launchers, AK-130 naval guns and AK-630 rotary cannon system, the Russian Navy informs.