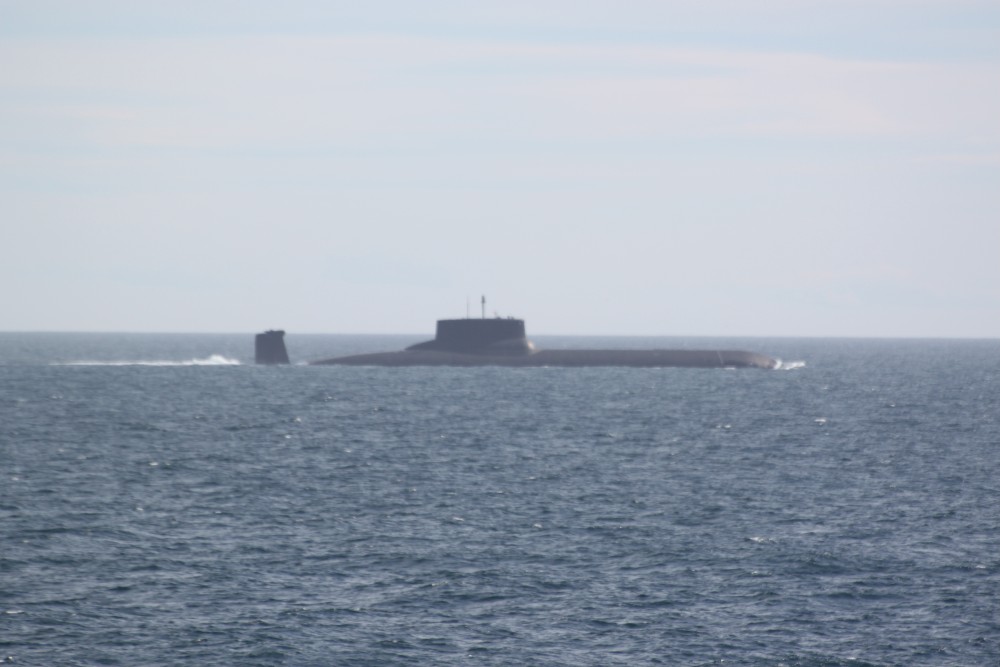 The Typhoon submarine has been sailing in surface position all along the coast of Norway. Photo: K/V Sortland, Norwegian Coast Guard.

«Of course, this is also a show of force to Norway, Germany, Sweden, Poland and some other countries,» says Russian commentator.
Read in Russian | Читать по-русски
By

Why is «Dmitry Donskoy» – the world’s largest nuclear-powered submarine - sailing on the surface all the way south along the coast of Norway?

The giant Typhoon-class sub left Severomorsk on the Kola Peninsula on Monday and is Wednesday still sailing in surface position.

Press spokeswoman with the Norwegian Joint Head Quarters, Major Elisabeth Eikeland says to the Barents Observer that the Typhoon submarine is currently sailing south of Kristiansund in the Norwegian Sea.

«We don’t know why the submarine isn’t submerged,» she says.

The Russian navy has not said why the submarine sails in surface position all the way en route south.

«Dmitry Donskoy» is sailing together with the Northern Fleet’s nuclear-powered battle cruiser «Pyotr Velikiy» towards St. Petersburg where both vessels will participate in the Naval Day celebration on July 29.

But, according to Russian military commentator Aleksandr Khrolenko, the naval parade in St. Petersburg is not the only goal of the powerful voyage.

«Amid the growing military and political pressure from the United States and NATO a parade in St. Petersburg is not the only goal of this naval voyage. Of course, this is also a show of force to Norway, Germany, Sweden, Poland and some other counties,» Aleksandr Khrolenko writes in an up-ed in RIA Novosti.

A sobering effect on NATO

«The Baltic region has become a testing ground for NATO-maneuvers,» Khrolenko argues and says Moscow threatens nobody, «only responds to the infinite expansion of NATO to the east.»

Explaining Moscow’s reactions to NATO’s Baltic activities, Khrolenko says «if some of our partners do not understand words, then maybe the Russian Navy will send a more comprehensible signal to them.»

Listing the powerful armament on warships Aleksandr Khrolenko writes that the Northern Fleet’s battleships will have «a sobering effect on NATO» showing that «Russia will not abandon its positions in the Baltics.»

Starting this weekend, Russian and Chinese warships will carry out a joint maritime exercise in the Baltic Sea.

The Chinese naval vessels were greeted by the Norwegian frigate «KNM Otto Sverdrup» in the North Sea on Tuesday. From the North Sea, the Chinese navy vessels now sails into the Baltic Sea and the exercise will take place from July 21 till July 28.

«This exercise will be yet another reminder for the West about “multipolarity and the advantage of partnership and cooperation,» Khrolenko writes.

It is not known what role the Typhoon submarine and the nuclear powered battle cruiser will have, if any, in the exercise.

The 172 meters long «Dmitry Donskoy» is the only remaining sub of the originally six in the class. Today, «Dmitry Donskoy» does not carry nuclear weapons, but normally serves as a test-bed for the navy’s new generation Bulava balltistic missiles. The nearly 40 years old submarine has Severodvinsk in the White Sea as homeport.

Powered by to 190 MW reactors, the Typhoon is the most powerful submarine ever built.