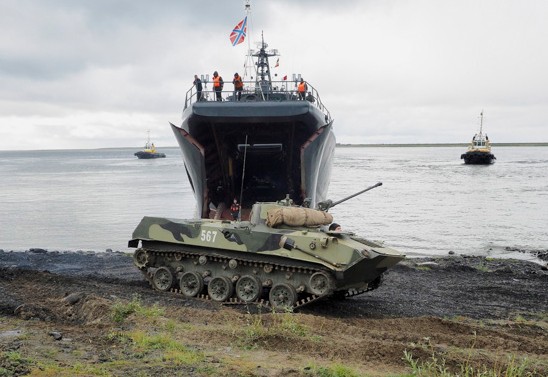 In line with the training scenario, a joint task force of Northern Fleet units on Monday defeated a group of terrorists which had occupied a facility in the area. With assistance from paratroopers, aviation and special-purpose forces from the Central Military District, they attacked the enemy and subsequently moved deeper into the Taymyr Peninsula to protect key industrial facilities, the Russian Armed Forces inform.

The exercise started with air attacks of enemy compounds followed by the drop on site of paratroopers and subsequent artillery fire from the Northern Fleet vessels.

The exercise was held on a desolate part of River Yenisey, not far from port town Dudinka.

The training was part of a series of Arctic exercises currently conducted by the Northern Fleet. On August 10th, a convoy of four warships and three support vessels set out from Northern Fleet’s main base of Severomorsk. Five days later, they made port call in Dikson, the town by the mouth of the Yenisey River, and subsequently in Dudinka.

Similar exercises have been held annually since year 2012. In 2013, Northern Fleet ships headed by nuclear-powered battleship “Pyotr Velikiy” made it to the far eastern New Siberian Islands on a voyage which marked the start of construction the new major Arctic base of Kotelny.