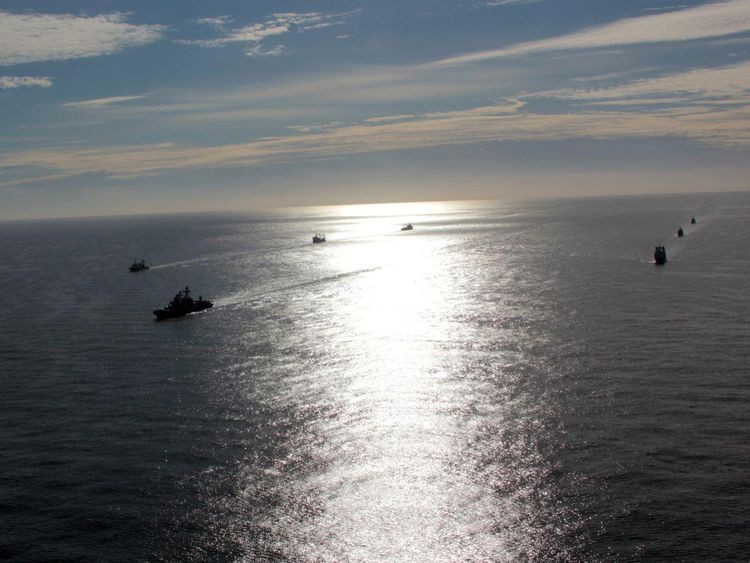 The group of Northern Fleet warships sailing the Kara Sea on its way to the north coast of Siberia. Photo: Russian Northern Fleet

For the sixth year in a row, the Navy shows muscles along the Northern Sea Route. First port calls are Dikson and Dudinka.
Read in Russian | Читать по-русски
By

A convoy with four warships and three support vessels that left the Northern Fleet’s main base Severomorsk on August 10th anchored outside Russia’s Arctic outpost Dikson on Tuesday.

Navy spokesperson, Captain Vadim Serga, says to Murmanski Vestnik that the vessels were practicing joint manoeuvres in the Kara Sea. Now the convoy continues up the Yenisey river to the port of Dudinka. Yenisei is the largest river that flows into the Arctic Ocean and Dudinka is an important harbour for cobber and nickel from the industrial city of Norilsk.

The Navy has not announced from where the warships will sail after, but it is expected they will continue further east along the Northern Sea Route. Last year, a detachment of Northern Fleet ships got assistance from nuclear powered icebreakers and sailed all the way east to the Kotelny Island, part of the archipelago New Siberia Islands between the Laptev Sea and the East Siberia Sea.

Russia’s Northern Fleet started voyages along the Northern Sea Route in 2012 when the largest warship of them all, the nuclear-powered battle-cruiser “Pyotr Velikiy” sailed into the Kara Sea on a training mission.

In 2013, the second naval task force, also headed by “Pyotr Velikiy”, sailed east to the New Siberian Islands for the first time, carrying out a number of training missions. The convoy consisted of more than ten vessels, and the campaign was said to be part of the Ministry of Defence’s initiative to fulfil the Russian state’s Arctic policy. The policy says Russia is the leading Arctic power.

Last year, the Northern Fleet’s destroyer “Vice-Admiral Kulakov” headed the group of warships that sailed to the Kotelny Island, where surface-to-air-missiles were fired and cruise missiles launched, the Barents Observer reported. The Northern Fleet vessels were also engaged in drills near Russia’s only offshore oil production platform, the Prirazlomnaya in the eastern Barents Sea.