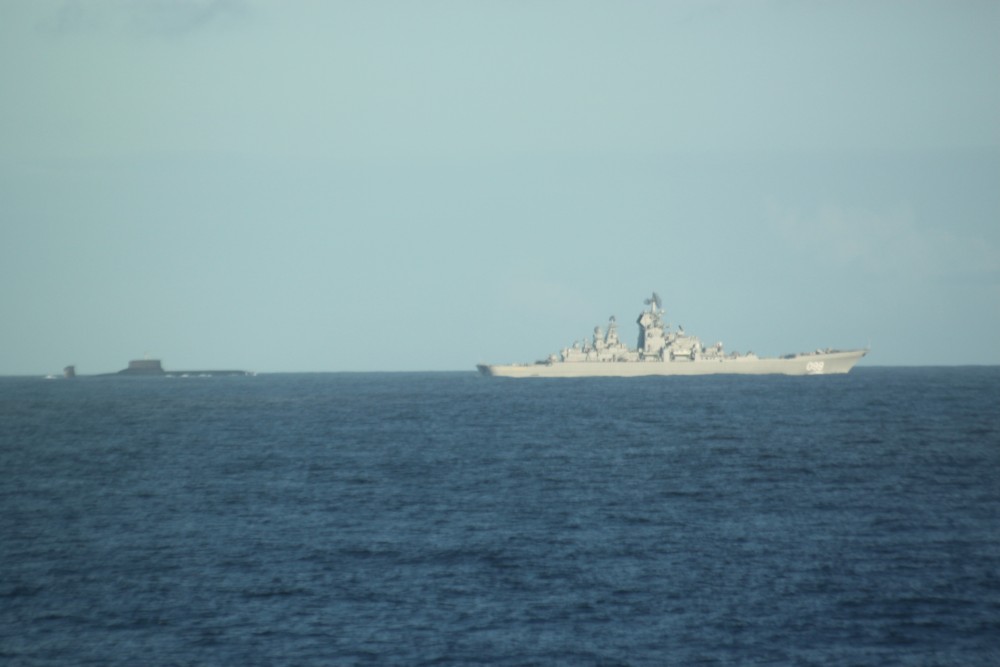 This photo of "Pyotr Velikiy" and "Dmitry Donskoy" was taken when the vessels were sailing south in mid-July outside the coast of Norway. Photo: Norwegian Coast Guard

Returning from Naval Parade in St. Petersburg, the two largest nuclear powered vessels of the Northern Fleet will soon again appear in Scandinavian waters.
Read in Russian | Читать по-русски
By

Together with other warships from the Baltic and Northern fleets, the two nuclear giants are now making ready for joint maneuvers, Russia’s Ministry of Defense announces. No details are given on where the joint maneuvers will take place. Russia’s Baltic Fleet has its main base in Kaliningrad.

Last week, Chinese and Russian warships participated in the first joint naval exercise the two states have had in the Baltic Sea, an area with increased geopolitical tensions.

En route back to the Kola Peninsula, the vessels will have to sail outside the coast of Finland, the Baltic states, Sweden, Poland, Germany, Denmark and finally all long the coast of Norway. The southbound voyage lasted for two weeks, and attracted much attention in the Scandinavian countries. «Dmitry Donskoy» - first time sailing into the Baltic Sea - stayed in surface position not only through the shallow waters in Denmark, but throughout the entire voyage.

Nils Bøhmer, an Norwegian expert on nuclear safety, said to the Barents Observer he was «deeply concerned about the safety on board this nuclear armageddon machine.» «Dmitry Donskoy» is the last remaining of the Cold War Typhoon subs and is powered by two nearly 40-years old reactors.

«Dmitry Donskoy» normally serves as a test-bed for Russian ballistic missiles of the Bulava-type and has Severodvinsk in the White Sea as homeport. The nuclear-powered battle cruiser «Pyotr Velikiy» makes port calls to Severomorsk on the Barents Sea coast.

About ten warships of the Northern Fleet took part in the Naval Parade Day in St. Petersburg and are all now sailing north. Among them are also the missile cruiser «Marshal Ustinov» and the large anti-submarine ship «Vice-Admiral Kulakov».

Russian military commentator Aleksandr Khrolenko said the goal of bringing the Russian navy’s two giant nuclear powered vessels to St. Petersburg was not only to participate in the Naval parade.

«Amid the growing military and political pressure from the United States and NATO a parade in St. Petersburg is not the only goal of this naval voyage. Of course, this is also a show of force to Norway, Germany, Sweden, Poland and some other counties,» Khrolenko wrote in an up-ed in RIA Novosti.