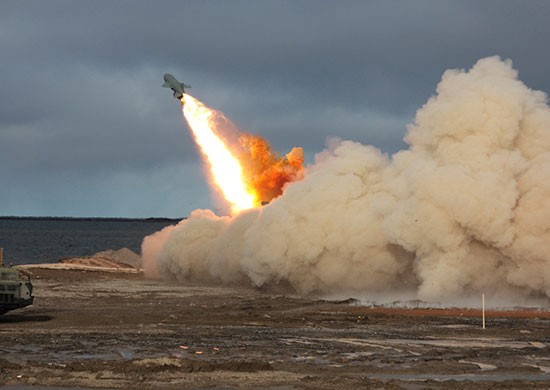 From the Baltic to the Barents Sea, to the far eastern Arctic base of Kotelny - lethal fire power is in the air.
Read in Russian | Читать по-русски
By

The Russian military is showing off its new and modernized capacities along a major part of its northern borders. Including in the Arctic.

At the same time as the Zapad-2017 is raging in the Baltic and large-scale training is unfolding in the Barents Sea and Kola Peninsula, the Northern Fleet unit stationed in the remote base of Kotelny is firing cruise missiles.

On Monday, the forces on the island were engaging in an exercise which included protection of the remote base against enemy forces, the Northern Fleet press service informs. The training included shooting with both artillery and cruise missiles.

Two Termit cruise missiles (SS-N-2 Styx) were fired from the coastal missile complex Rubezh against targets in the Laptev Sea. The targets were located about 50 km away in an ice-covered part of the area, the Northern Fleet says.

Included in the training was destroyer «Severomorsk», the Northern Fleet vessel which in August took part in the major Navy training in Yenisey River and the waters off the Taymyr Peninsula.

The «Severmorsk» was firing with its air-defense missile complex Kinzhal (SA-N-9 Gauntlet), as well as the artillery complex AK-100 and AK-630.

«The successful shooting of the tactical group located on the New Siberian Island and the «Severomorsk» once again shows that we are capable of decently executing operations on the protection of the islands and coasts in the Russian Arctic», says Navy Head Commander Nikolay Yevmenov.

«The activities of the fleet is conducted in strict coherence with the principles of international law and is not aimed against third countries and their interests in the waters of the Arctic Ocean», he adds.

The exercise comes as the Northern Fleet is about to complete its new facilities in Kotelny, one of a string of new and upgraded based along the Russian Arctic coast. The Kotelny base is located on the New Siberian Island and includes the Temp airfield and a major new building complex, all of it due to be fully operational in the course of 2017.

In addition to the Kotelny, modernized bases are located in Rogachevo in Novaya Zemlya, the Aleksandra Island in Franz Josef Land, the Sredny Island in Severnaya Zemlya, the Wrangel Island and in Cape Schmidt.

The country says it needs the bases in order to protect its expanding industrial activities in the region, as well as the Northern Sea Route.