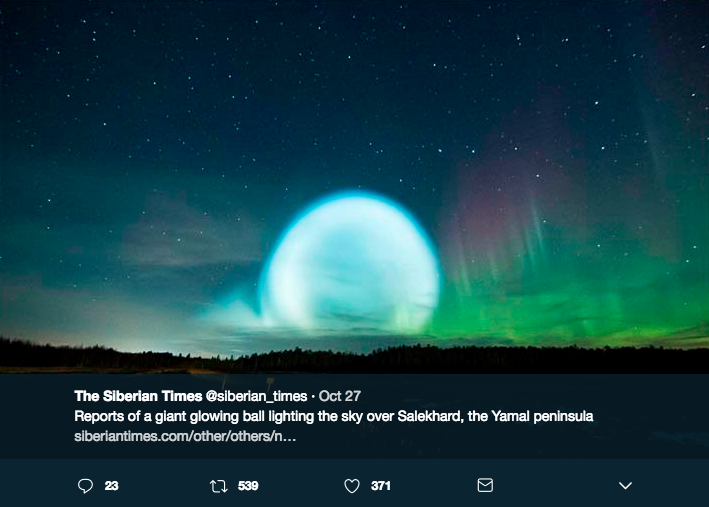 The glowing ball expanded in circles before dissipating in space above scared residents.
Read in Russian | Читать по-русски
By

It was the regional newspaper Sever Press in Salekhard that first reported about the amazing photos starting to appear on Russian social media from around the Arctic Yamal region Thursday evening. The newspaper has also publised video of the sight.

“Today, I witnessed a unique phenomenon. I was capturing northern lights and suddenly I say a huge glowing ball to my left. […] The glowing ball rose from behind the trees and moved in my direction. First, I thought it was the most powerful searchlight, but the speed and the changing of everything around me change that idea.”

“The ball began to turn into an arc and gradually dissipated,” Anisimov says. His spectacular photos are posted on the portal of Vesti Yamal.

Speculations about UFOs were published on VKontake and other social media across Siberia. The glowing ball was especially visible over Salekhard, the capital of Yamalo-Nenets Autonomous Okrug, but photos were also posted from other places in Siberia, like Strezhevoi in the Tomsk region, the Siberian Times reports.

Long time readers of the Barents Observer will remember the spectacular photo of a Russian submarine launched Bulava missile that went into spiral before exploding, visible over Norway’s Finnmark area in December 2009.

Another two ballistic missiles came from a Pacific Fleet submarine in the Sea of Okhotsk, heading towards the Chizha test range on the Kanin Peninsula east of the Barents Sea.

Russia’s Chanel One TV, on Friday reported that President Vladimir Putin himself was overseeing the complex exercise of the strategic nuclear missile forces. Additional to land- and sea based ballistic missiles, the drill included strategic bombers that launched cruise-missiles at different targets across Russia and Kazakhstan, including towards a test range in the Komi Republic west of the Ural Mountains.

Unlike the 2009 Bulava missile captured by Norwegian photographers as it went into spin and self-destructed, the glowing ball over Siberia was not necessarily a failed missile.

Pavel Podvig, an independent analyst who runs the research project “Russian Nuclear Forces” says to the Barents Observer that it is hard to tell from the pictures.

Swedish Security Policy expert Emil Strand explains that the unusual glow in the sky is caused by rocket fuel. “It could be fuel burning in the atmosphere or a result of separation of a rocket booster stage prior to orbital insertion or when re-entering the atmosphere. It could also be in the late phase of the launch when fuel are spread around and create such glows,” Emil Strand explains to the Barents Observer.

He says Russia traditionally keeps detailed information about strategic missile launches secret and if there were some kind of failure with one of the missiles tested last Thursday, information will likely not be made public.

“In recent times it has been of most importance for Russia to show how effective weapon programs are and then there would be a desire to hide deficiencies,” Strand says.

Deployed Topol missiles are equipped with a new advanced warhead, meant to more effectively penetrate the missile defenses of a potential enemy, like the up-coming U.S. anti-missile defense systems.

In September, the strategic nuclear forces two times tested the advanced Yars (RS-24) missile with dummy nuclear warheads. Both times, the missiles were launched from Plesetsk and reportedly hit their target at the Kamchatka Peninsula.

It is known from other ballistic missile tests that sights like the one over Siberia could be caused when rocket exhaust expands because in space there is not enough air to contain it. When lighted by the sun, the burning fuel or exhaust could be visible from the ground over huge distances.

Both Plesetsk and the launch site in the Barents Sea are more than a thousand kilometres away from Salekhard.

Analysing the video posted by Russia’s Defence Ministry, Pavel Podvig writes on his blog that all three submarine launched missiles were liquid-fuel missiles. “This means that the Okhotsk Sea salvo involved two R-29R missiles launched from one of the Project 667BDR/Delta-III submarines. The Barents Sea launch was that of a R-29RM Sineva from one of the Project 667BDRM/Delta-IV submarines.”

Normally, Russia’s Strategic Missile Forces use to publish both the type of submarine and name when launches take place. This time, no names of the submarines are given in the official press statement or told to Russian media.

One more than last year

Last October, the annual large-scale ballistic missile drill took place on October 12, as reported by the Barents Observer. Then, three missiles were launched, criss-crossing the Arctic similar to the exercise last Thursday.

A difference, though, is that this year, all missiles were launched in dark.

“What now happens in the world is utterly awful,” Vigdís Finnbogadóttir