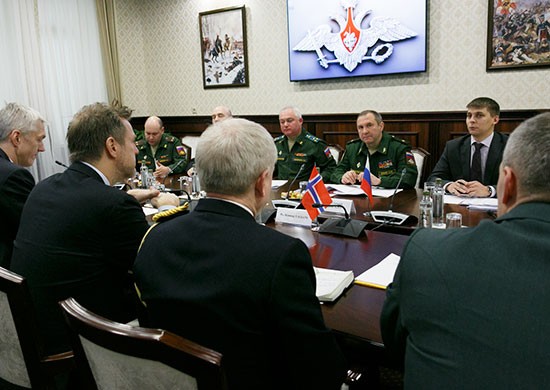 Russian and Norwegian military officials around the same table in Moscow on February 2. Photo: Russian Ministry of Defense

First meeting between Russian and Norwegian defense ministries since 2013.
Read in Russian | Читать по-русски
By

“A mutual wish to exchange information about military activities and contribute to avoid misunderstandings,” says the Norwegian Defense Ministry in a short note informing about Friday’s meeting in Moscow.

In 2014, Norway halted all military cooperation with Russia after what Norway names “the illegal annexation of Crimea” and “violations of international law and destabilisation of Ukraine.” The only exceptions were border guard and coast guard cooperation in the north. The two countries also keep the door open in regards to search- and rescue cooperation in the Barents Sea and the Arctic.

The meeting, which took place in the defence ministry’s offices in Moscow, was only for consultations and did not include any politicians. However, such meeting is important in times of increased tensions between east and west, also in the high north.

“The meeting agenda included discussions on topics like regional and international security, the situation in Syria, as well as possible steps to reduce tensions, develop bilateral confidence-building measures and prevent incidents connected with military activities,” the Russian text of the ministry’s press-note reads.

[An earlier version of this article quoted the English press-note from the Russian Defense Ministry saying “possible steps towards bilateral cooperation in military sphere” was discussed. That is not correct. Bilateral military cooperation was not up for discussion, the Norwegian Defence Ministry informs. Mil.ru has also corrected its English press-note.]

The sides also shared views on current state of military contracts between Russia and Norway, and, according to the Russian ministry “the sides agreed to continue contracts.”

While defence ministry officials from the two countries were meeting, a former Norwegian border inspector, Frode Berg, were brought into a court room by masked men from FSB and given another three months in custody in the Lefortovo prison in Moscow. Berg is accused of espionage on behalf of Norway and risks up to 20 years imprisonment if sentenced guilty.

Frode Berg (62) was working with the Border Commissioner on Norway’s 196-kilometre long border to Russia for 25 years. Berg told reporters in the courtroom on Friday that he feels trapped into the case and maintain he is accused of something he hasn’t done.

In February 2013, just a month before the annexation of Crimea, Norway’s Defense Minister at the time Anne-Grete Strøm-Erichsen met with her Russian colleague Sergey Shoygu in Moscow. The two then agreed to expand military cooperation and prepared a joint security agreement on exchange of classified information.

“The good military cooperation with Russia in the north is important for Norway. It contributes to build trust and understanding,” Minister Strøm-Erichsen said after the meeting. She was then the first Norwegian defense minister to visit Moscow since 2003.

In Moscow on Friday, the Norwegian ministry officals made it clear that it is out of question to resume the military cooperation that were put on halt in 2014 “because of Russia’s violation of international law in Ukraine.” Still, the ministry underlines, “it is of big value to exchange information and experiences directly to maintain stability in the north.”

In October and November this year, Norway will host NATO’s high-visibility exercise Trident Juncture with tens of thousands of soldiers. The exercise will take place south of the Arctic Circle, from Trøndelag and along the cost to Bergen, and in the inland south to the forest areas north of Oslo.

About 35,000 soldiers from about 30 countries will participate. The exercise includes about 150 aircrafts, 70 navy vessels and up to 10,000 military vehicles.

Last year, Russia’s exercise Zapad-2017 made headlines in Norway and other European countries.

In March 2017, Russia’s Embassy in Oslo complained about Norway’s military winter exercise taking place in Troms and Finnmark. The Embassy was unhappy about the “provocative” battle training during exercise Joint Viking where also US Marines participated.