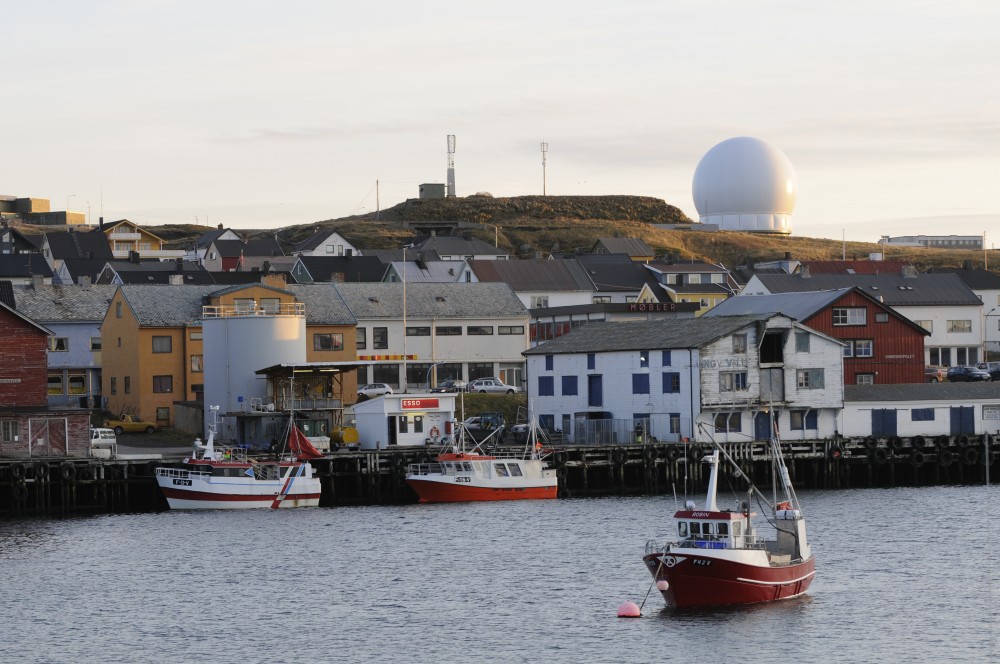 The Globus-II radar is highly visible on the rock above Vardø harbor. Photo: Thomas Nilsen

«Such behavior does not promote good neighborly relations.»
Read in Russian | Читать по-русски
By

A year ago, on March 24 2017, nine Russian aircrafts were simulating an attack on Norway’s radar station in Vardø.

The mock attack, made by bombers from airbases on the Kola Peninsula, became public last week after Director of the Norwegian Intelligence Service, Lieutenant General Morten Haga Lunde, gave details in his annual speech at Oslo Military Society. He showed the route of the aircrafts flying into attack position just northeast of Norwegian air space. None of the aircrafts violated the border, but were close enough to possible launching of weapons before they backed off and returned home.

Foreign Ministry spokeswomen Kristin Enstad says to the Barents Observer the case has been brought up with Russian authorities.

«The Foreign Ministry can confirm that the case is brought up appropriately with Russian authorities. It was made clear that we consider such behavior does not promote good neighborly relations,» Enstad says and continues: «On the contrary, it contributes to a decline in confidence, predictability and stability in the north.»

The main objective for the Globus radars in Vardø are to map movements in the airspace over the Barents Sea and other areas of interest for Norway in the north, the Norwegian intelligence says in a short description on its web-portal. The radars are also collecting information about activities in space.

Additional to simulating an attack on the Vardø radar station in March, two other mock attacks were disclosed by the head of the intelligence service. In May, a group of 12 aircrafts were flying tactical flights towards a fleet of NATO vessels exercising in the Norwegian Ocean in the waters outside Tromsø. In late May, another similar mission was directed towards military installations in the Bodø area.

In Bodø, Norway’s fleet of F-16 fighter jets are based. Outside of town is the Norwegian military’s Joint Head Quarters.

Last year, the Barents Observer with reference to NRK reported the loss of GPS signal for commercial aircrafts over Eastern Finnmark during Russia’s large-scale military exercise Zapad-2017. For about a week in September, SAS and Widerøe flying to airports like Kirkenes and Vardø in periods had to navigate with the help of radio signals due to loss of GPS. The jamming came from Russian sources across the border on the Kola Peninsula.