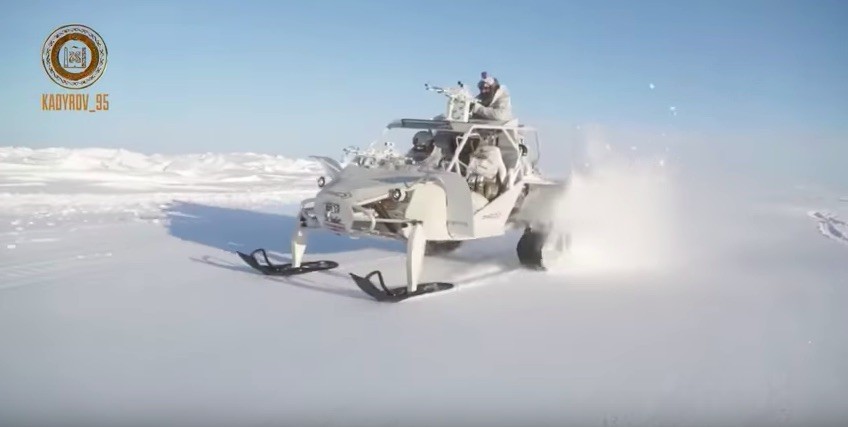 Screenshot from video by Kadyrov_95

Snow-going vehicle Chaborz M-3 is made in the Chechen Republic on request of chieftain Ramzan Kadyrov.
Read in Russian | Читать по-русски
By

Little is known about the buggy which reportedly was developed by the Chechnya-based University of Spetsnaz on request of regional leader Ramzan Kadyrov.

Pictures distributed by the Chechens show a belt-based vehicle with two front skies and double gun positions. In a social media comment, the Spetsnaz University says that the vehicle recently was tested during a military exercise in Franz Josef Land.

It has a low center of balance and is very stable, the Chechens say. The vehicle is developed based on the combat buggy Chaborz, a terrain car built at the Chechenauto factory in the Chechen town of Argun. The first Chaborz vehicles were produced under the guidance of the Spetsnaz University in 2017, information from the university website says.

The training in Franz Josef Land took place in March this year. It was conducted together with special forces from the Russian National Guard. The soldiers were parachuted onto the show-covered stretches of the Arctic archipelago. They subsequently engaged in the training scenario: to hunt down and eliminate a group of bandits.

The training followed an anti-terrorism exercise in Murmansk.

The Chechen flag waved in the wind at the Arctic base as National Guard leader Viktor Zolotov greeted the troops.

«The training conducted under special geographical and climactic conditions allows us to try out new forms of military action, harmonize management systems and to test perspective kinds of military equipment and armament», Zolotkov said in a press release.

Over several years, Chechen forces have built up significant capacities in Chechnya and beyond.

In 2016, a combat group of Chechen special forces headed by Major Daniil Martynov held an exercise close to the North Pole. The Chechens first flew to the Norwegian archipelago of Svalbard and from the there proceeded to the Barneo base and further to the North Pole.

Martynov is a key power figure in the new Spetsnaz University and is depicted repeatedly together with Ramzan Kadyrov.

It was Kadyrov who in 2013 decided to develop the university. It includes a huge multi-functional complex for education and military training.

According to the university itself, it will become the biggest institution in the world of its kind when finished. «It will be of indefinite importance for Russia’s military capacities, counter-terrorist combat and other fight against other threats in the current complex geopolitical world situation,» the university website says.

Included in the university programs are not only shooting, parachuting and tactical training, but also training for military journalists and so-called information-technological training.