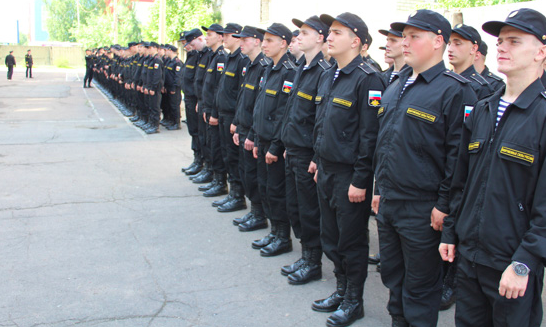 These young men line up for 12 months of military service in the Arctic. Photo: Russian Defense Ministry

Likely the northernmost and coldest place on earth for mandatory military service.
By

The archipelago covers more than 83,000 square km and stretches north of the 74th parallel. More important, most activities on the Arctic islands are military and of increasingly strategic importance for Russia.

This week, 170 young men from the Arkhangelsk region, called in for obligatory military service, were told prepare for transfer to Novaya Zemlya, the Defense Ministry tells.

They should be ready for severe tests in the Arctic with winter temperatures down to minus 40 degrees Celsius and Polar Night for most of the winter.

The 170 recruits were among the 1,500 young men from Arkhangelsk region to do military service. The others went to serve in the navy, army, air force and Rosgvardia – the Russian government’s internal military force reporting directly to the President.

Conscription is a mandatory 12-month draft for all men being Russian citizens age 18 to 27. The service was from1993 gradually reduced from 24 months to 18 months and in 2008 to 12 months. There are a number of exceptions of who have to team up for obligatory military service.

At Novaya Zemlya, the main military settlement is Belushya Bay on the southern of the two islands. Nearby is the newly renovated and upgraded Rogachevo air base. Earlier this year, the Commander of the Northern Fleet, also in charge of Russia’s Arctic Bridges, said Novaya Zemlya is a top priority for 2018.

In Soviet times, being sent to a military-construction brigade at Novaya Zemlya was considered a punishment. Maybe not so today, the Arctic is highlighted as one of the top military priorities for Russia’s Armed Forces.

This summer, a military expedition with soldiers from the Kola Peninsula has crossed 850 km from Rogachevo to the Matockhin Strait.

From 1955 to 1962, Novaya Zemlya was the Soviet Union’s test range for atmospheric thermonuclear weapons. After the ban on atmospheric nuclear tests in 1963, two underground test areas were used, one near the Chyonaya Bay on the southern island from 1972-1975 and another at the Matochkin Strait from 1964-1990.

A total of 224 nuclear- and thermonuclear tests have been carried out at Novaya Zemlya. The two last real underground nuclear weapons tests took place on October 24, 1990.

Russia is still using the test range for subcritical nuclear weapons tests and other nuclear weapons related testing. Because of secret nature of the weapons programs, access to Novaya Zemlya is strictly controlled. In practice, the entire archipelago is a closed off military- and border zone.