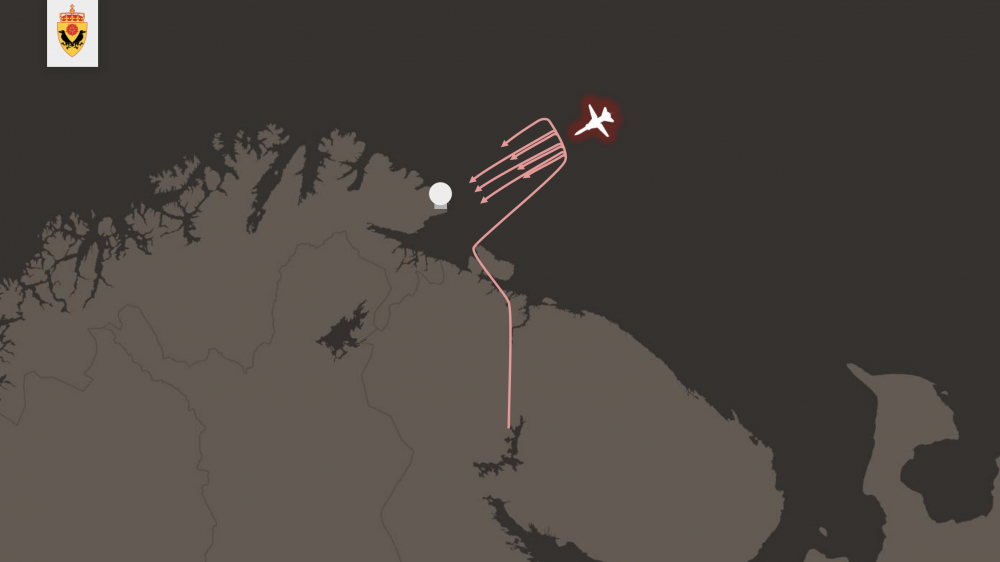 Flying in attack formation, the group of Su-24 attack aircraft turned away just before Norwegian airspace.
Read in Russian | Читать по-русски
By

Haga Lunde had earlier in the day presented Focus 2019 (in Norwegian), the intelligence service’s report on threats and security analyses.

«Russia’s military activity in our region signals dismay with Norway,» Haga Lunde said and stressed that there are «no indications that relations between Russia and the West will improve in 2019.»

He then showed the map of how a group of 11 Sukhoi-24 (NATO name Fencer) supersonic attack aircraft taking of from Monchegorsk air base on the Kola Peninsula flying out in the Barents Sea before taking a 180 degree turn into an attack formation towards Vardø.

Vardø is Norway’s most northeastern town.

«The scenario was very similar to what took place on March 24th, 2017, but this time with more aircraft, in total 11 Fencer planes, in formation, Morten Haga Lunde said in his speech and quoted by TV2.

Located on a small island on the Barents Sea coast, Vardø is traditionally a fishing town, but its location close to Russia’s heavy militarized Kola Peninsula makes it a perfect location for radar surveillance.

The so-called Globus-II radar has for decades been a torn in relations between Moscow and Oslo. Officially the radar observes objects in space. It is also believed to be highly capable of monitoring and building a signature database of Russian ballistic missiles.

The radars in Vardø are operated by the Norwegian Intelligence Service.

Kristian Åtland with the Norwegian Defense Research Establishment is expert on Russian military activities in the Arctic. He says to the Barents Observer that the mock attack looks like a «deliberate and carefully planned Russian signaling operation.»

«Obviously, the Russians know that their fighter jets are being tracked by radar when they operate in this region and when they approach Norwegian installations, bases or naval exercise areas in attack formation. Such behavior does not exactly contribute to an atmosphere of trust and predictability at the regional level,» Åtland says.

«This is the emerging security challenges that Norway is facing in the High North,» Kristian Åtland elaborates.

He points to other regions with similar challenges. «Other countries in the eastern border regions of Europe, like Finland, Sweden, Denmark, Poland and the Baltic states, not least to mention Ukraine, have in recent years experienced similar Russian behavior, even in the form of air border violations.»

«This may potentially heighten the risk of dangerous episodes and lead to a further deterioration of Russia’s already difficult relationship with the West and NATO,» Åtland says.