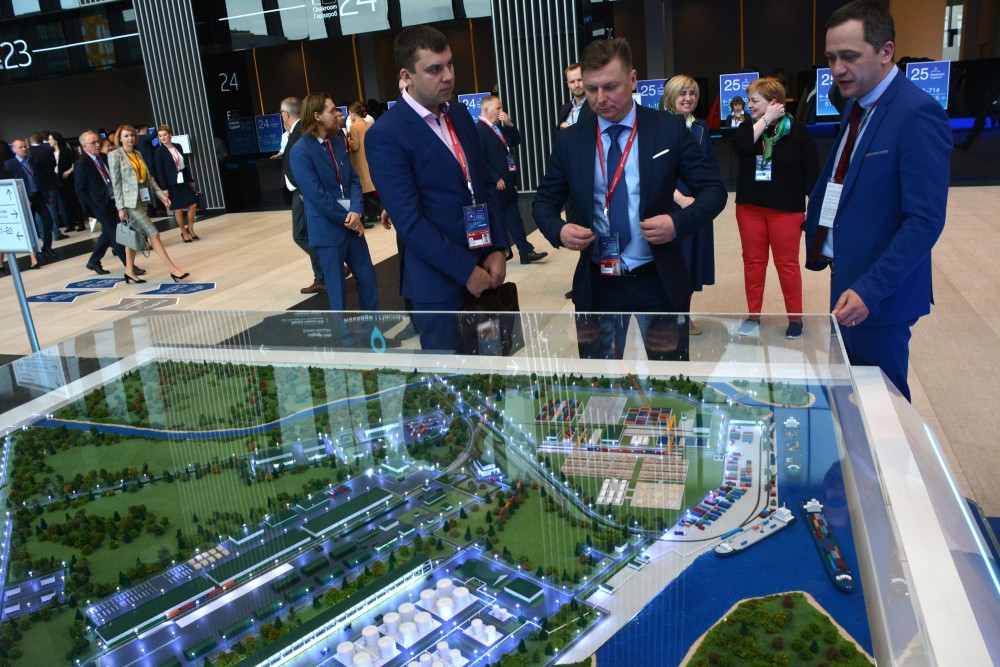 The new military logistics base in Arkhangelsk on display during the Arctic Forum in St.Petersburg. Photo: Atle Staalesen

A military logistics center in Arkhangelsk is to handle millions of tons of goods destined troops and bases across the Arctic.
Read in Russian | Читать по-русски
By

A string of military units have been deployed in new and upgraded bases along the Russian Arctic coast. They have a growing need of supplies.

Now, the country is building a new logistics center that is to help its Northern Fleet handle the complex and expensive transport operations in icy waters. It is constructed on a plot along the Northern Dvina river, near the City of Arkhangelsk.

The facility will become a crucial hub for reloading and storage of supplies for military activities in the region. Included will be indoor storage capacity of 31,500 square meters and outdoor space of 300,000 square meters, representatives of regional authorities in Arkhangelsk revealed in a meeting late March.

According to the developers, the center will be able to handle more than one million tons of goods per year. At any time, up to 27 thousand tons of solid goods can be stored on site along with 78 thousand tons of fuels and lubricant materials and 260 vehicles and units of machinery.

Construction is in the process and the whole facility due to stand ready for operations in year 2021.

It is built on a 140 hectare plot outside the city center, in an area near the sea port of Ekonomia. Construction is managed by a company affiliated with national nuclear research center Kurchatov Institute. Investments are estimated to 15 billion rubles (€205 million), RBC reports.

A miniature model of the center was on display during the recent Arctic Forum in St.Petersburg. It showed a large facility with plenty of space for containers and goods. Several major buildings are nearby and a port complex with cranes is connected with roads and railway.

Not only military equipment and goods will be channeled through the center. According to the project developers, up to 80 percent of capacity will at times be applied by non-military commercial companies.

The Arkhangelsk logistics center is the first of four facilities of the kind to be built all over Russia. Next in the line are centers in Kaliningrad, Vladivostok and Sevastopol, to serve respectively the Baltic, Pacific and Black Sea Fleets.

Russia’s growing need for new military infrastructure and transport capacities in the Arctic has over the last years materialized itself in the building of a number of new naval vessels and capacities. That includes a new fleet of military transportation ships. Two ships of the Zvezdochka-class have been put on the water and another three are under construction. The latest of the ships, the «Akademik Kovalyov», is reportedly built to transport a wide range of weaponry, including the Bulava missiles.

It is believed that Oboronlogistika, the company established and owned by the Ministry of Defense, is key stakeholder behind the new center in Arkhangelsk. In only few years, the company has secured itself a significant role in northern waters. In 2016, it officially got the role as so-called joint logistics operator for the Arctic, which means that it will provide supplies to the expanding military facilities, bases and ships in the region.