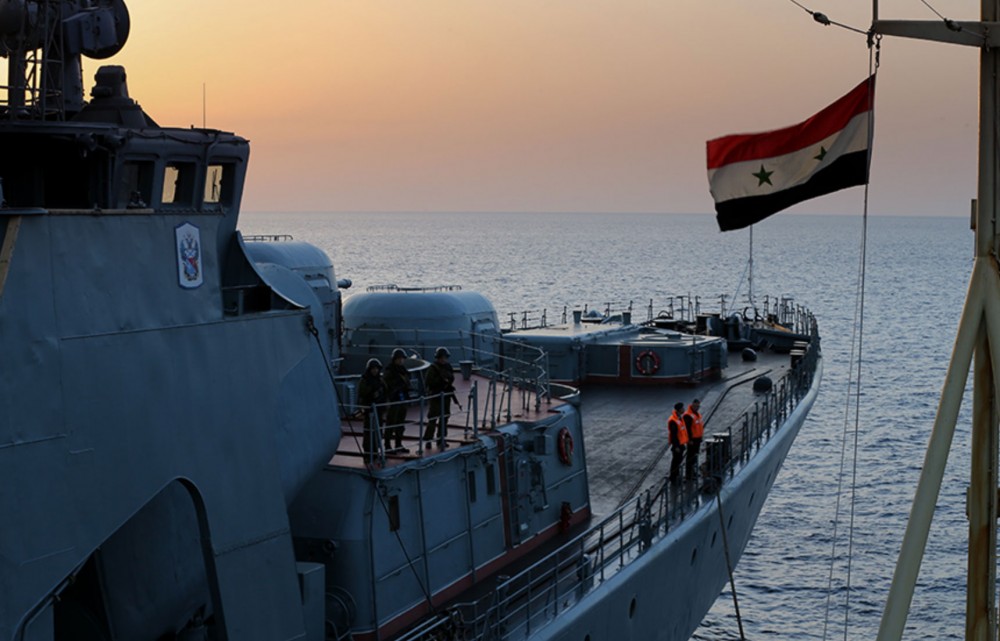 A Russian military vessel outside the coast of Syria. Photo: mil.ru

«Syrian experiences are successfully being applied in the North.»
Read in Russian | Читать по-русски
By

Newly appointed leader of Russia’s Arctic forces Aleksandr Moiseev spoke in a seminar devoted to the Russian military engagement in Syria. The seminar was organized by the Northern Fleet itself and the top commanders of the fleet’s main units all participated, the Russian Navy informs.

«The Syrian experiences are already successfully being taken use of in the military preparedness of troops and forces in the Northern Fleet,» Moiseev said in the seminar.

«In modern combat action we can not lean on the models of the previous century,» the vice admiral underlined.

In the course of the event, participants presented ways the Russian Armed Forces have engaged in Syria, in operational planning, use of aviation and air defense, intelligence and electronic warfare, as well as tactical action with surface ships, land forces and coastal missile complexes.

On display outside the meeting facilities was military hardware applied during the operations in the Arab country, including drones, armored vehicles and weaponry.

The Northern Fleet have actively contributed to the Russian military action in Syria. Various forces have been engaged, including ground forces, aviation and ships.

In late 2016 and early 2017, nuclear powered battle cruiser «Pyotr Veliky» and the aircraft-carrier «Admiral Kuznetsov», as well as several more ships from the Northern Fleet, took part in a major offensive outside the coasts of Syria. Also submarines were part of the flotilla.

It is believed that also a significant number of special forces from the Navy’s bases in the Kola Peninsula have taken part in various Syrian operations.

In addition, long-range bombers Tu-22M3 normally based in Olenegorsk have participated in a big number of sorties over Arab country.

Aleksandr Moiseev is new Head Commander of the Northern Fleet. He was appointed in early May this year, and came from the post as head commander of the Black Sea Fleet. He has long experiences from the North. For more than two decades, he served on board submarines that criss-crossed the Arctic.