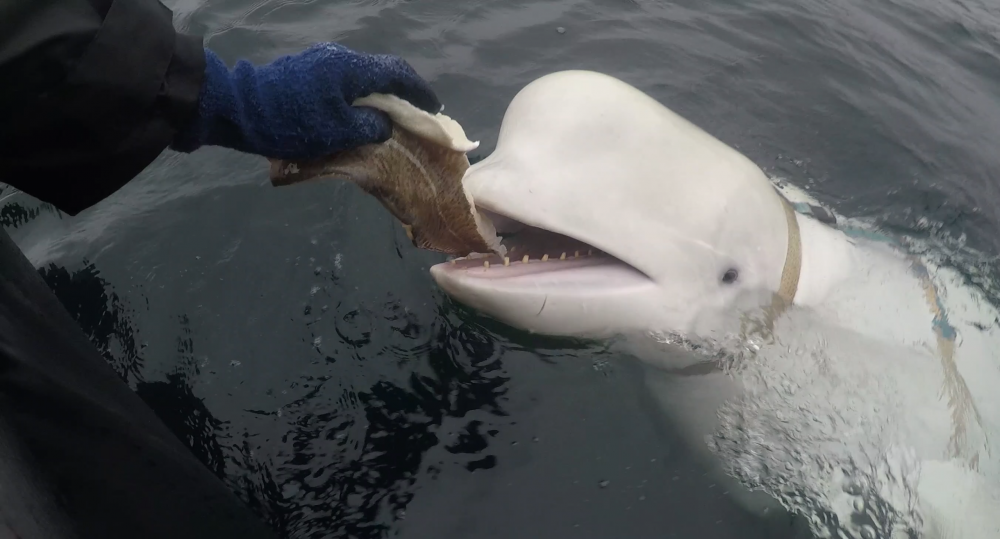 "Whaledimir" - or Hvaldimir as he is named in Norwegian - is still swimming around in the area around Hammerfest, Norway. Photo: Jørgen Ree Wiig / Norwegian Directorate of Fisheries

New satellite images from from the secret base of Russia’s Main Directorate for Deep Sea Research on the coast of the Kola Peninsula show that two pens with beluga whales are tied up with extra mooring ropes to hinder the animals to escape.
Read in Russian | Читать по-русски
By

The two pens are tied up after runaway ‘Whaledimir’ was first spotted by local fishermen on Norway’s Barents Sea coast in late April and it could be that he escaped while the pens were being moved to the new location.

In May, the Barents Observer published a series of Google Earth satellite images showing two locations on the Kola Peninsula within closed naval territories where beluga whales are kept locked up in pens.

Recently updated satellite images from the same area now show that there are two pens less in Goryachie Ruchy south of Polyarny and these two are likely the ones moved to the inlet of Olenya Bay and tied up in between a small island and the mainland.

There are three clearly visible mooring ropes and lines to each side from the two pens, with additional ropes in between the mooring lines.

At least one beluga whale can be seen inside the largest pen.

The new location is a few hundred meters to the north of the easternmost pirs at the submarine base in Olenya Bay. Unlike other submarine bases on the coast of the Kola Peninsula, the submarines here are not carrying weapons, but are specially designed for underwater research and spy-operations.

Olenya Bay is home to Russia’s secret special missions submarines, the  29th Special Submarine squadron, operated by the Main Directorate for Deep Sea Research, also nicknamed GUGI. Last year, the Barents Observer published a longer story about the base and the fleet of spy-submarines, including several small nuclear-powered subs that can sit still on the seafloor.

The «Losharik» nuclear-powered special purpose submarine that was hit by a fatal fire in July killing 14 crew members had Olenya Bay as homeport.

When ‘Whaledimir’ first appoached humans in Norway, he was wearing a harness with mounts for a GoPro camera.

It is still unclear how the well trained and people-friendly whale managed to escape from the Russian military or what possible mission he was part of with the GoPro camera when coming to Norwegian waters outside Hammerfest.

Swimming from Olenya Bay or Goryachie Ruchy to Hammerfest is a distance of some 500 kilometers.

The notable submarine publication Covert Shores have published two maps found on Russian social media that appear to show a plan for locating three beluga pens at a new facility in the eastern end of the Olenya Bay.

If so, it is a clear indication of how the Russian secret military underwater program gives priority to continued training and underwater missions with beluga whales and maybe other marine mammals like seals or dolphins.