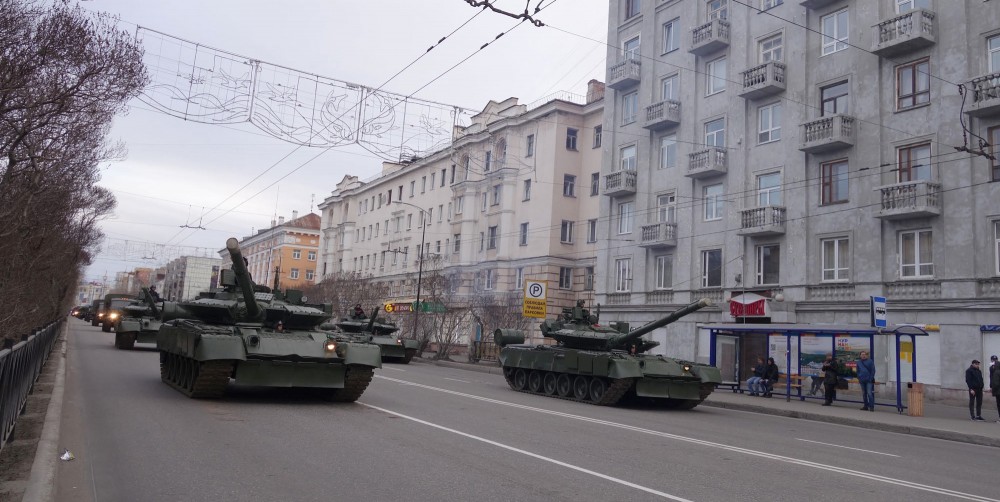 The Northern Fleet complements its motorized infantry units with a series of new and powerful T-80BVM tanks.
Read in Russian | Читать по-русски
By

The last party of new tanks have arrived to the infantry units in the Kola Peninsula, the Northern Fleet informs.

A total of 26 tanks model T-80BVM are now deployed in the bases located near the border to Norway and Finland. The upgrade of the regional infantry started in 2018 and several parties of the armored vehicle have since been sent to the far northern units.

The T-80BVM is an upgraded version of the T-80BV main battle tank. It was first publicly revealed by the Russian Armed Forces in 2017. The Russian military considers the T-80BVM the tank best suited for operations in the high north.  It has a 125 mm smoothbore gun with a range of up to 3,000 meters. Secondary armament consists of a coaxial 7,62 mm machine gun and roof-mounted 12,7 mm machine gun.

The new tanks were tested during a major exercise in September this year.

According to the Northern Fleet, the tanks can hit enemy targets at a distance of up to five kilometers. It is equipped with the guided anti-tank missile system Refleks, as well as 3rd generation explosive reactive armor Relikt.

The Northern Fleet has its tanks deployed in Pechenga, an area located along the border to Norway and Finland. Among the local units are the 61st Naval infantry brigade and the 200th Motorized Rifle Brigade.

The forces are a core part of Russia’s new Arctic Brigade.