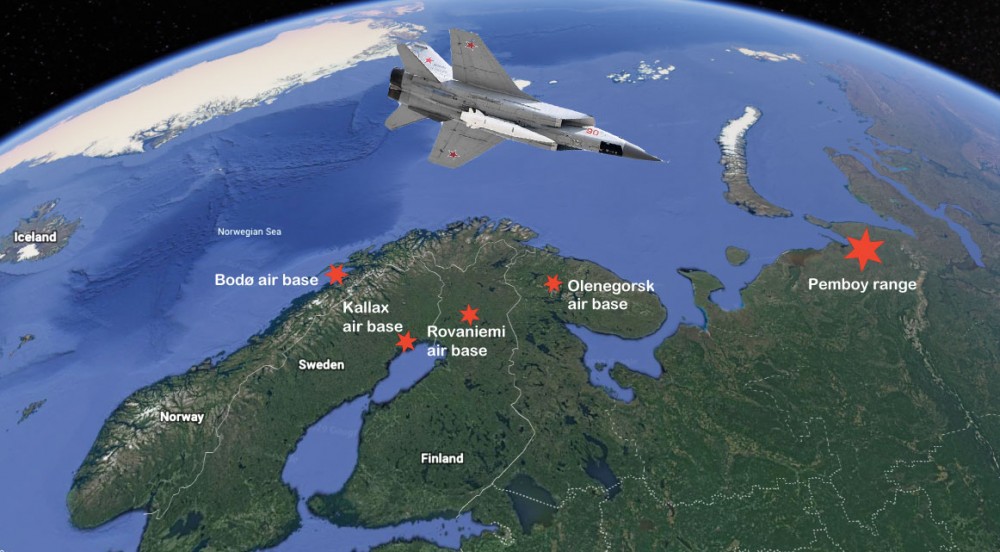 Launched from MiG-31K aircraft from Olenegorsk air base, the Kinzhal missile can hit the three Nordic air bases of Bodø in northern Norway, Kallax in northern Sweden and Rovaniemi in northern Finland. The November-test was launched against the Pemboy range near Vokuta in the Komi Republic. Map: Barents Observer / Google Earth

The Kinzhal missile was launched from a MiG-31K taking off from Olenegorsk airbase on the Kola Peninsula.
Read in Russian | Читать по-русски
By

The missile changes the military power-balance in the north due to its range, speed and ability to overcome any known missile defence systems.

Kh-47M2 Kinzhal (NATO name SA-N-9 Gauntlet) is one of the six new strategic nuclear weapons under development in Russia. Several of them were highlighted by Vladimir Putin in his presidential address to the Federal Assembly on March 1, 2018.

Now, the missile is tested and like several of the other new strategic weapons under development by Russia, the test took place in the northwestern part of the country.

“The test took place in mid-November. The missile was launched at a ground target located at the Pemboy training ground from a MiG-31K carrier plane, taking off from Olenegorsk airfield,” a military source said to news agency TASS.

Olenegorsk air base is an hour drive south of Murmansk, while the Pemboy range is about 60 kilometres from Vorkuta, just west of the Ural mountains in the Komi Republic. The missile was likely launched while the aircraft was over the Barents Sea.

In principle, the Kinzhal missile is an air-carried version of the Iskander land-based short-range ballistic missile. That said, placing such missile on an aircraft gives it a more dangerous strategic position.

First, the missile could be launched from unpredictable locations because an aircraft moves much faster than a land-based vehicle. Secondly, an aircraft adds extra range before the missile itself is launched.

The test missile in mid-November reached a speed of 10 Machs another source told TASS.

Kinzhal can carry both conventional and nuclear warheads.

Both the Mig-31 and the Tu-22M3 are based on the Kola Peninsula.

As previously reported by the Barents Observer, the MiG-31 will also serve the new airfield currently under construction at Nagurskoye base at Franz Josef Land.

For Nordic neighbours, the Kinzhal missile will pose a totally new military challenge. In distance from Olenegorsk air base south of Murmansk, Norway’s Bodø air base is 800 kilometres away and within range with good margins.

Bodø is the main airport for Norway’s fleet of F-16 fighter jets.

Deployed at aircraft taking off from the Kola Peninsula, the Kinzhal gives Russia a deterrence measure against any NATO surface warships in the bastion area.

Russia’s bastion area is north of the Greenland, Iceland, and United Kingdom (GIUK) defense line and covers the Norwegian- and Barents Sea. This is the area where Russia will make denial, or anti-access, for NATO ships and aircraft in order to guarantee the survival of the ballistic missile submarines (SSBNs) and by that secure credible nuclear strike deterrence. All of the Northern Fleet’s SSBNs are based in Gadzhiyevo north of Murmansk.

At a speed of Mach 10 within seconds after launch from an airborne MiG-31, the response time in case of conflict is highly limited for Russia’s Nordic neighbours.

The US based Missile Defense Advocacy Alliance said the missile’s performances allows it to overcome “any known United States air or missile defense systems.”