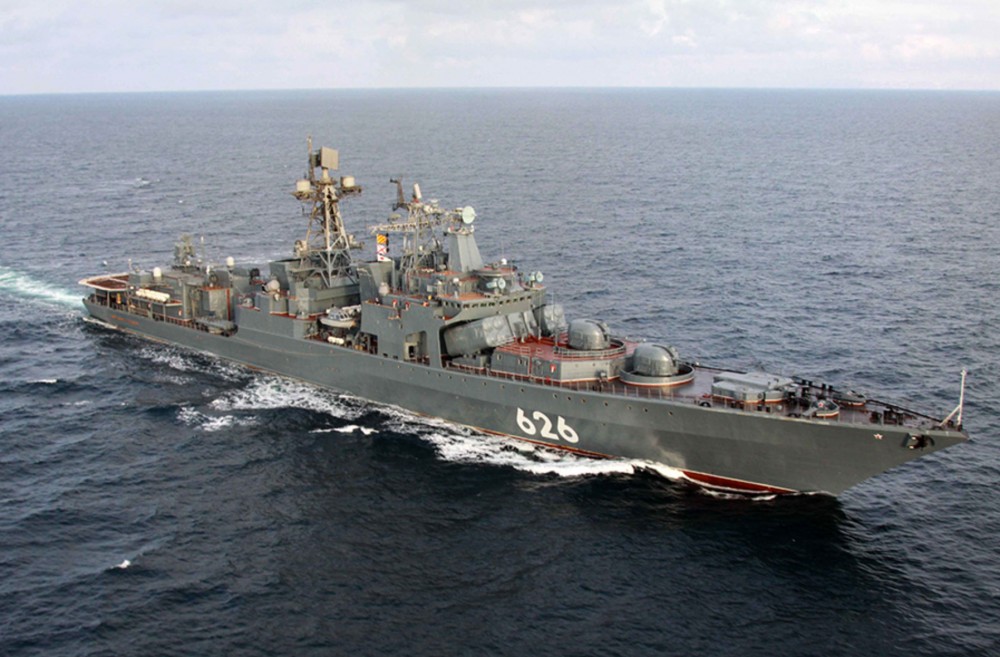 Two big naval vessels from the Northern Fleet trained combat against enemy aircrafts off the Norwegian coast.
Read in Russian | Читать по-русски
By

It was the large landing ship “Kondopoga” and destroyer “Vice-Admiral Kulakov” that on the 6th of February engaged in extensive training in the southern part of the Norwegian Sea.

The ships that are on their way back to their home base in Severomorsk, Kola Peninsula, after several weeks of sailing, fired both heavy artillery and cruise missile system Kinzhal, the Northern Fleet informs.

The exercise scenario included repulsive measures against an attack by enemy aircraft. The crews of both vessels displayed confident skills with handling the weapons, the Navy press service says.

The two ships will now move north to the Barents Sea where addition training is to be held. Their return to Severomorsk is due next week.

It is believed that also the large missile cruiser “Admiral Ustinov” is in the area.

The training area is located just south of the Arctic Circle and in vicinity of several Norwegian offshore installations, including the Aasta Hansten, Norway’s northernmost natural gas field connected to the national pipeline grid.

In a comment to newspaper VG, Head of the Norwegian Intelligence Service, Lt. Gen. Morten Haga Lunde says that the exercise close to Norwegian waters should be seen as part of Russia’s bastion defense.

If Russia feels threatened, the military plan is to expand its bastion defense beyond the Barents Sea, conducting sea denial operations in the maritime spaces of northwestern Europe, all the way to the Greenland-Iceland-UK (GIUK) gap.

Over the last two years, Russia has exercised the bastion defense concept with surface warships, submarines and aircraft several times in the Norwegian Sea.

Last August, the exercise Ocean Shield, originally taking place in the Baltic Sea, made a surprise move, lasted one week longer than planned and the warships sailed to the waters ooutside northern Norway.

It is obvious that Russia want to show its dissatisfaction with this winter’s NATO-exercise in Norway, Cold Response,” Haga Lunde said to VG.

Cold Response takes place from 2nd to 18th of March, but already now there are visible military activity as some allied participants are arriving to prepare themselves for the exercise.