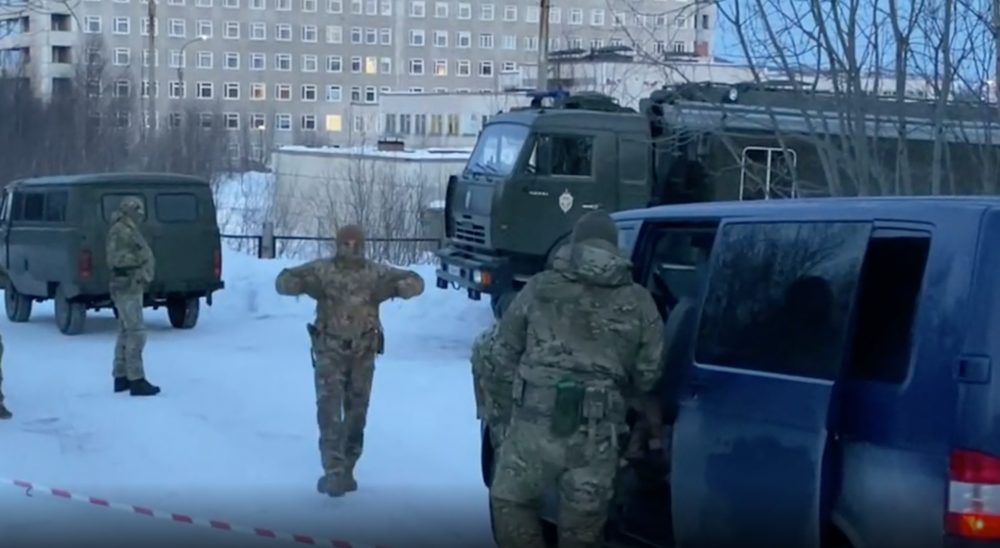 The shootout happened next to an apartment block not far from the TV mast in Murmansk. Screenshot from video by the Anti-terrorist committee

Russia’s National Anti-terrorism Committee says the man was planning to carry out a terrorist attack.
Read in Russian | Читать по-русски
By

An improvised explosive device, weapons and ammunition were found at the site of the shootout, news agency Interfax reports.

The weapons and explosives were ready for use in a planned terrorist attack, the Anti-terrorism Committee informs.

“Tonight, during FSB’s operational-search in Murmansk, the whereabouts of an armed bandit who planned to carry out a terrorist attack was established,” the agency told Interfax.

When trying to detain the man, a shootout started between him and the special forces. The man was killed.

His identity is established, and according to the law enforcement Anti-terrorism Committee, the man was a supporter of ISIS and was planning to run to the Middle East after committing the terrorist attack.

No further details are given.

News-agency RBK posted a video from the scene showing a dead person next to a pistol and a bag. The location is near the TV-mast in Murmansk.

News-agency RIA Novosti informs that two other terrorist attacks were prevented by FSB on Friday, in Stavropol region in southern Russia, and in  Khanty-Mansi Autonomous Okrug in Siberia.

In December last year, FSB arrested another man in Murmansk for preparing a terrorist act near the building of local authorities in Murmansk by using a home-made explosive device. The man, a Russian citizen, was allegedly a supporter of the Right Sector extremist organization.

The Right Sector movement, however, denied any involvement with the person.