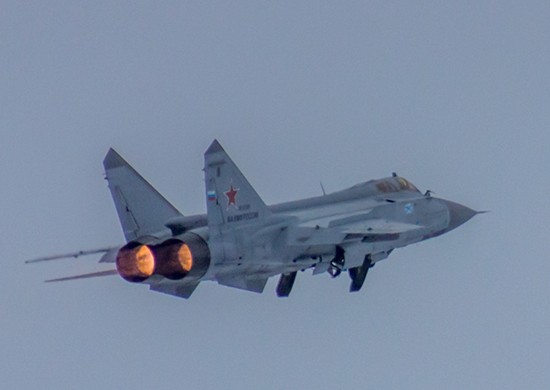 A MiG-31 after take-off from an airfield on the Kola Peninsula. Photo: Northern Fleet press service

The upgraded version of MiG-31 interceptor-fighters based on the Kola Peninsula performed flights up to 17,000 meters.
Read in Russian | Читать по-русски
By

“The crews of upgraded MiG-31 interceptor-fighters will practice assignments at a maximum altitude in the course of tactical flight drills that have stated in the Northern Fleet’s separate composite air regiment this week,” the note from the fleet reads.

“The pilots will climb to the lower layers of the stratosphere over the Arctic to an altitude of about 17,000 meters.” That is more than 55,000 feet.

In comparing, NATO countries, including Norway and Great Britain’s, new F-35 combat aircraft has a maximum operational altitude of 50,000 feet, the Royal Air Force specifications fact-site reads. That’s doesn’t mean the plane can’t fly higher, but the higher you fly, the higher is the risk of pilot oxygen deprivation.

The Northern Fleet doesn’t specify where in the Arctic the drill takes place, but the MiG-31s are part of the Composite Aviation Regiment, based at the Monchegorsk airfield south of Murmansk on the Kola Peninsula.

Given the range of the aircraft, the drill has to have happened in the airspace over the Kola Peninsula and the Barents Sea.

The flights took place both day and night. During the exercise, the planes practiced joint operations to strike a notional enemy’s forces at sea, on land and in the air.

Last fall, a MiG-31K taking off from the Kola Peninsula test-launched Russia’s new nuclear-capable Kinzhal missile over the Barents Sea.

The air launch version of Kinzhal (Kh-47M2) in many ways changes the military power-balance in the north due to its range, speed and ability to overcome any known missile defense systems.

Launched from an aircraft, the missile flies ballistic and has a range of about 2,000 km, which in practice means it can hit most military airfields or bases in northern Scandinavia and the Norwegian Sea in a very short time after the plane takes off from the Kola Peninsula.

The Olenya airbase trained on defending the runway after a notional enemy sabotage attack. Ground troopers repelled the attack, restored the destroyed runway, repaired equipment and delivered fuel and ammunition to the Tu-22M3 bomber which took off and bombed a designated target.

Olenya airbase is north of Monchegorsk on the Kola Peninsula.