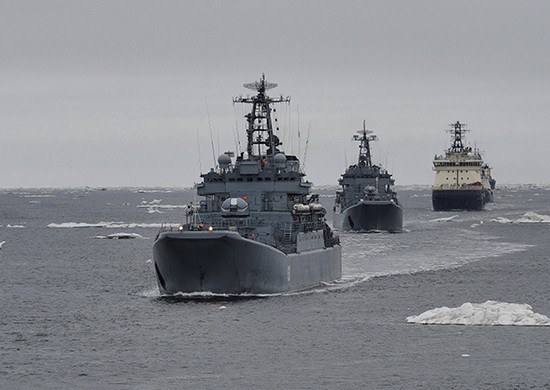 Two Northern fleet landing ships and an icebreaker are among the eight vessels to sail the north coast of Siberia. Photo: mil.ru

This is the ninth year in a row that Russian Navy ships sail the Northern Sea Route. Destinations and port-calls are not yet announced, but traditionally the annual flotilla sails all east to Kotelny Island, where  Russia has one of its new Arctic bases.

Kotelny is part of the New Siberian Islands in the Laptev Sea in the eastern sector of the Northern Sea Route.

Additional to «Severomorsk», the two landing ships «Kondopoga» and «Aleksandr Otrakovsky» will be sailing, as well as the new navy icebreaker «Ilya Muromets», the tanker «Sergey Osipov», the minesweeper «Vladimir Gumanenko» and the rescue tugboat «Pamir». Together with the crane ship KIL-143 all these vessels have this week been training together in the Barents Sea, but are currently back in port in Severomorsk, making ready for the Arctic voyage, the press service of the Northern Fleet reports.

Several of the vessels have participated in previous years’ voyage where live-shooting exercises, landings, and anti-terror drills at locations like Dudinka and the Kotelny Islands were included.