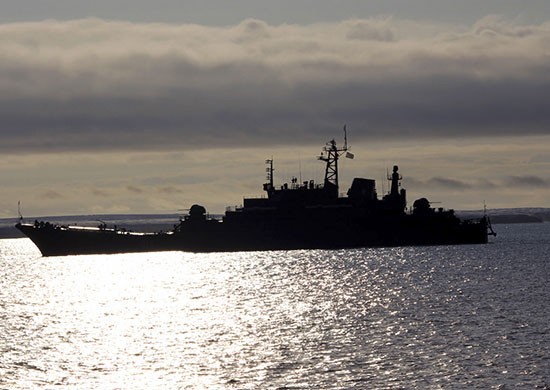 A week after major naval drills, a surprise inspection brings 20 Northern Fleet vessel back to sea

The naval force that now sets out to the Barents Sea includes a powerful landing unit that is likely to engage in training near Norwegian shores.
Read in Russian | Читать по-русски
By

The surprise exercise was announced on the 17th July and is reported to include up to 150,000 soldiers in the country’s Southern and Western military districts, as well as airborne troops and marines of the Northern and Pacific fleets.

Several Northern Fleet vessels on the 18th July set course for the Barents Sea, and their numbers will soon total 20 ships, representatives of the Navy informs. Also submarines and support ships, as well as about 10 aircraft, 250 pieces of heavy armament, vehicles and special equipment will be applied.

The main focus on the exercise is landing of forces on the far northern shores of the Kola Peninsula.

Included in the training are powerful units from the Northern Fleet’s motorized infantry based in Pechenga, near the border to Norway and Finland.

According to the Navy, the exercise will focus on the containment of various crisis situations that pose threats to national security, and also on an escalation of epidemiological, radiation and chemical situations.

The unannounced inspection comes just few days after the Northern Fleet completed one of its biggest exercises this year. More than 30 ships were part of the drills that included tactical drills and shooting with rockets, missiles, artillery, torpedos and other kinds of weapons.

In a comment, Head Commander Moiseev explained that “the group of diversified forces have conducted a series of drills on support for the fleet’s strategic nuclear forces, search and elimination of simulated enemy submarines, tactical engagements and means of attack of enemy naval groups, protection of coastal areas, protection of naval communications, protection of maritime economic activity.”