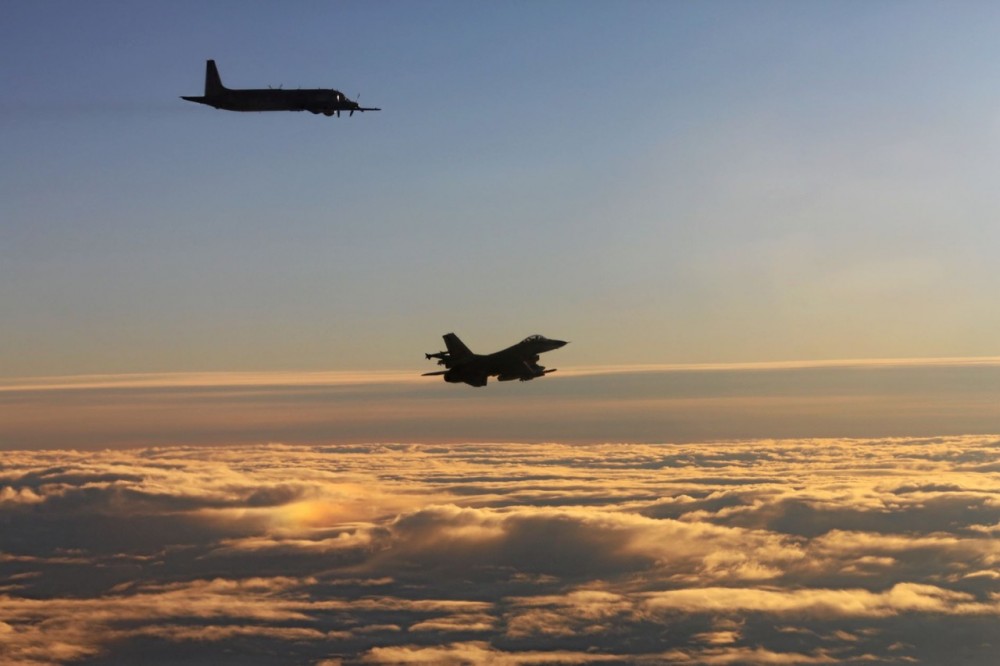 A Norwegian F-16 and a Russian Il-38 aircraft from earlier in 2020. Photo: Norwegian Air Force

With two F-16s in the air on Monday, the number of QRA (Quick Reaction Alert) to identify Russian military planes in the north has already passed the 2019 count.
Read in Russian | Читать по-русски
By

This weekend, Stordal tells, were two Russian Tu-142 anti-submarine warfare planes from the Northern Fleet identified outside Norwegian air space. The planes continued south to north of England before returning home. Two weeks ago, the US Navy submarine Seawolf surfaced outside Tromsø in northern Norway for crew replacement.

By September 14, Norwegian fighter jets on NATO alert have been scrambled 41 times. In 2019, 38 QRA take-offs took place. The number of Russian aircraft identified last year was 83, one less than so far in 2020, which still has more than 3 months left.

The Norwegian Joint Headquarters underlines that it has several means to identify Russian military planes, so scrambles itself do not necessarily paint the whole picture.

In the first 15 years after the end of the first Cold War, there were very few scrambles. In 2007, Russian long-range bombers (Tu-95 and Tu-160) again started to fly west of the Barents Sea into international airspace in the North Atlantic.

The number of scrambles from Bodø airbase increased until 2014. In 2015-2016 the Russian military flight activity in the north was substantially lower again, by the Norwegian military believed to be caused by activities other places, and maintenance challenges with the planes. From 2018, when Norway was host of exercise Trident Juncture, Russia’s long-distance flights increased again.

Last week, Norwegian, British, American and Danish maritime surveillance aircraft were daily met by Russian fighter jets over international airspace in the Barents Sea as the four-nation NATO naval group were exercising navigation in the area.