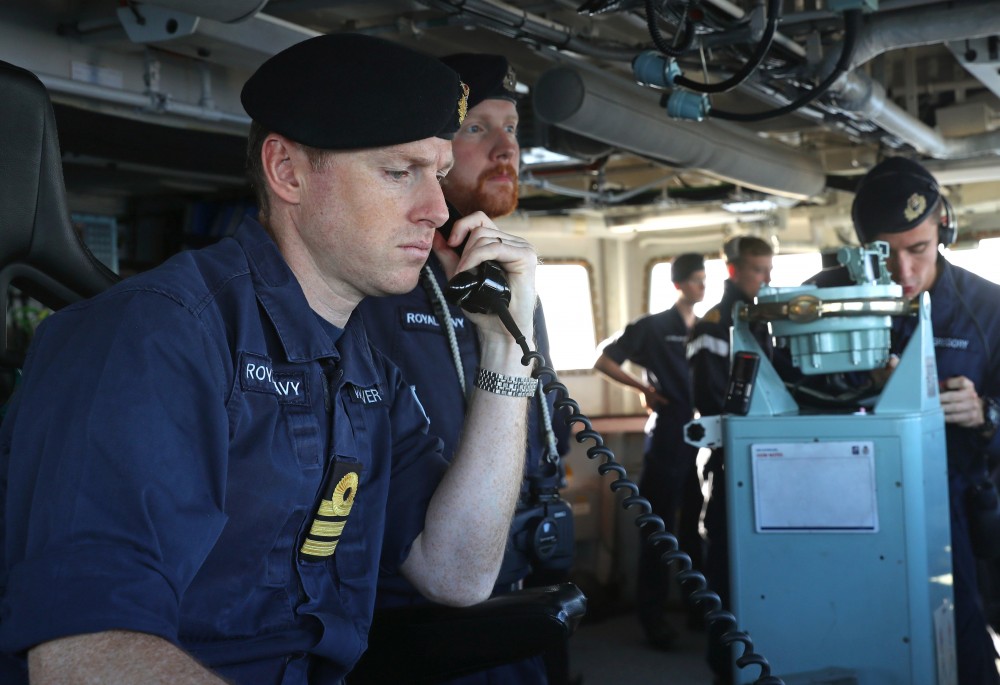 The British navy led the four-nation task group of warships and aircraft into the Barents Sea. Photo: Royal Navy

“The High North is witnessing a change in its security environment and represents a key area of interest for the UK. Recent Russian attempts to control freedom of access and navigation in the region are of concern to the UK and its partners,” the September 10 statement reads.

Per Erik Solli, an advisor with the Nord University in Bodø, says the exercise has been far larger in scope compared to a similar event in May when British and American surface warships sailed into the Barents Sea for the first time since the 90-ties.

“The number of naval vessels were about the same as in May, but importantly the Norwegian Navy joined the ships from the UK and USA this time. A number of different air force assets also participated,” Solli says.

According to The Telegraph, the Typhoon fighters have never before operated so far north in the Arctic.

Also, Norwegian and Danish military planes were flying the Barents Sea and interacted with the group of warships. Denmark’s contribution was a Challenger maritime surveillance aircraft, while Norway flew the P-3C Orion maritime patrol aircraft and the smaller DA-20 Falcon electronic surveillance aircraft. According to Russian media, referring to the National Defence Control Center, the Norwegian aircraft were met by MiG-29 fighter jets from the Northern Fleet several times this week over international airspace in the Barents Sea.

Also, the British RC-135 was met by a Russian MiG-29 in international air space over the Barents Sea.

An American P-8A Poseidon was part of the mission, according to a statement by the U.S. 6th Fleet.

Izvestia reports the NATO navy group to be operating about 200 kilometers from the Kola Peninsula. Lt. Col. Ivar Moen, spokesperson with the Norwegian Joint Headquarters, said earlier this week the area of sailing would be off the coast of Finnmark and the Fisherman Peninsula.

The Fisherman Peninsula is the westernmost appendix of the Kola Peninsula.

In May, the U.S. and U.K. warships operated in the western sector of the Barents Sea, while the four-nation mission this week sailed further east, closer to Russia’s strategic important navy bases.

The Barents Sea is the Russian Northern Fleet’s main exercise area and route to the North-Atlantic in case of escalating global military tensions. By securing the so-called Bastion defense in the waters between northern Norway and Iceland, Russia can threaten with areal denial for NATO forces into the northernmost parts of the North-Atlantic and by that making the ballistic missiles submarines of the Northern Fleet a reliable nuclear deterrance.

During the NATO mission this week, HMS Sutherland led the ships through a demanding series of exercises, testing their abilities to conduct surface and anti-submarine warfare in what the Royal Navy describes as “one of the world’s most challenging environments.”

No official information is provided about possible NATO submarines operating in the area. After the May voyage, Russian state-affiliated news agency TASS reported a US Navy Virginia-class nuclear-powered submarine and a Norwegian Ula-class diesel-electric sub had participated.

“It is vital to preserve freedom of navigation when melting ice caps are creating new shipping lanes and increasing the risk of states looking to militarize and monopolies international borders,” Wallance says.

He added: “The UK is the closest neighbour to the Arctic states. In addition to preserving UK interests we have a responsibility to support our Arctic allies such as Norway to preserve the security and stability of the region.”

“In order for allied forces to reinforce the defence of NATO’s northern part, they need to have the knowledge to operate there. For this reason, Norwegian and allied military personnel, groups, aircraft and ships need also to train and exercise in Norway and the High North in peacetime.”

Moscow has voiced concerns that the current increase in NATO sailings in the adjacent waters to Norway is part of the American anti-ballistic missile defense training.

The USS Ross has the capability to function as part of the Aegis Ballistic Missile Defense System.

Newspaper Izvestia reported on September 10 that although Norway last autumn officially said no to take part in the American anti-ballistic missile defense program, it provides ports for NATO ships that are part of the missile defense system.

“In August the destroyer USS Roosevelt (DDG-80) and the multipurpose nuclear submarine USS Seawolf visited there”, the newspaper writes pointing to the vessels’ port calls to Tromsø in northern Norway.

In an unusual move, the Russian navy this August and September sailed two corvettes from the Baltic Sea, via the inland waterways, to the White Sea and the Barents Sea.

The Buyan-class corvette Zeleny Dol launched a Calibr cruise missile from the White Sea at a coastal target located at the Chizha shooting range at Cape Kanin, according to the press-service of the Western military district.

By quickly sailing smaller warships with the new long-range Calibr navy missile via the inner waterways, Russia proves it can counter threats in one direction or another, that be the Baltic Sea one day or the Arctic the other.

Izvestia reports the Calibr and Zircon cruise missiles are capable of counter NATO’s anti-ballistic missile vessels in the Barents Sea.