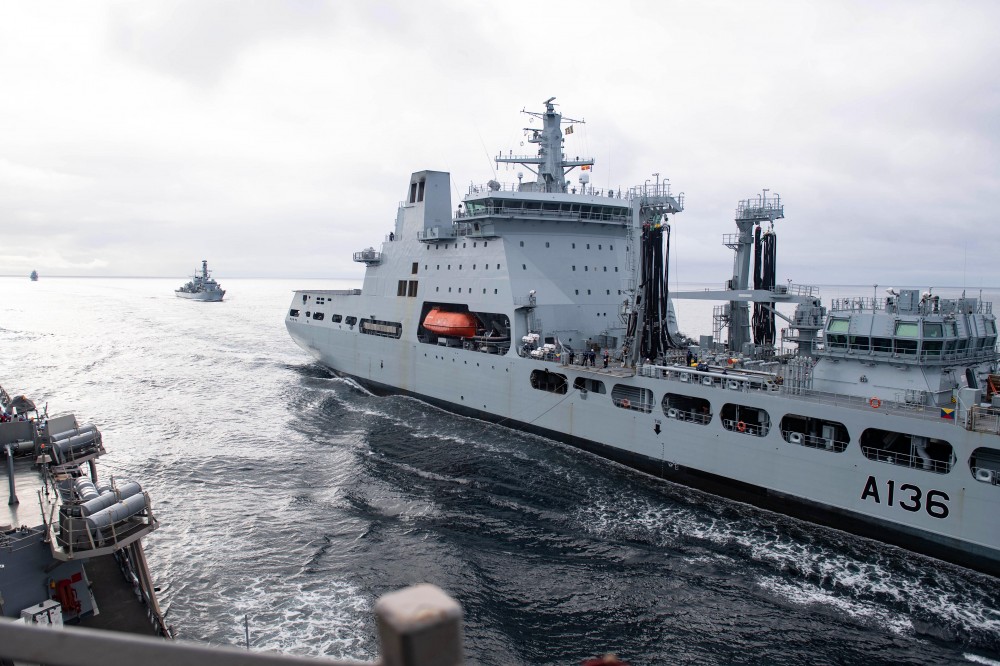 This is the first time since the 90ties NATO surface warships are conducting maritime security operations inside the Russian exclusive economic zone in the Barents Sea without participating Northern Fleet ships.
Read in Russian | Читать по-русски
By

The voyage is supported by Danish patrol aircraft.

“The vessel group will operate north of Finnmark and the Fisherman Peninsula in the course of the next few days,” says spokesperson Lt. Col. Ivar Moen with the Joint Head Quarters to The Barents Observer.

He confirms it is the first time a Norwegian frigate sails east of the Varanger fjord where the Russian, Norwegian maritime border goes north in the Barents Sea, on a mission not in cooperation with the Russian navy. Prior to Moscow’s annexation of Crimea in 2014, Norwegian frigates made several friendship port calls to Severomorsk, the main naval base of the Northern Fleet.

Although operating in international waters more than 12 nautical miles outside the Fishermen Peninsula, this is Russian exclusive economic zone (EEZ) waters.

For Russia, these waters are of highly strategical importance as both the Northern Fleet’s ballistic missile- and multi-purpose submarines are based on the coastline of the Kola Peninsula. Also, Russia’s 12th Main Directorate of the Ministry of Defense has five storage sites for nuclear warheads in the region.

The Fisherman Peninsula forms a protective coastline to the Barents Sea for Russia’s submarine bases west of Murmansk.

Here, in the bays on the southern side of the Motovksy Bay, are both Zapadnaya Litsa and Vidyayevo. Russia’s 4th generation multi-purpose submarine, the Severodvinsk, has homeport in Zapadnaya Litsa, while several Akula, Sierra and one Viktor-III class attack submarines are frequently at port in Vidyayevo.

A few tens of kilometers to the east is Gadzhiyevo, homeport to the fleet of six Delta-IV and two Borei-class ballistic missile submarines. In Olenya Bay are the fleet of special purpose submarines operating as part of Russia’s Main Directorate for Deep Sea Research.

Norway stayed away in May

When the U.S. Sixth Fleet, together with a British navy ship, sailed into the Barents Sea in May this year, Norway chose not to participate. Defense Minister Frank Bakke-Jensen told The Barents Observer “we want Norwegian forces to participate in this type of activities when it takes place off the coast of Norway,” adding it was not prioritized.

Today, not only is Norway participating with a navy frigate, it also sails east of the Norwegian economical zone in the Barents Sea.

Paal Hilde is Associate professor with the Norwegian Institute for Defence Studies. He says the move is notable.

“The Norwegian government has evidently decided that this time, the Norwegian Navy should take part in the allied exercise in the Barents Sea. Norway has long called for a more visible presence of allied naval vessels in the northern parts of the North Atlantic. In light of this, a refusal to join allies sailing up north would be odd. The government has thus overruled the skepticism expressed notably and recently by the commander of the Norwegian Joint Operational Command against such allied exercises and Norwegian participation in them,” Paal Hilde says to The Barents Observer.

He elaborated: “We must maintain low tensions in the north. If we operate together with american forces or other allied forces outside the Russian submarine bases on Kola, it will contribute to higher tensions.”

Minister Bakke-Jensen says in a statement posted on the Defense establishment’s portal on Tuesday: “We believe it is positive that they (allied navy forces) are here, and we want Norwegian forces to participate in this type of activity when it takes place off the coast of Norway, and when it is otherwise appropriate.”

The Royal Navy said in a statement this week the operation is aimed “to maintain peace in the region” …and… “The UK, US, Denmark and Norway are working together to boost readiness to operate in the High North and increase resilience in an area which is vital to UK interests.”

A U.S. 6th Fleet statement of September 7 underlined the importance of conducting sustained operations in vital waterways in the Arctic.

“Our maritime advantage continues to be out strong, cohesive partnership,” said Vice Adm. Gene Black, commander of the 6th Fleet.

“Our forces are able to conduct sustained operations in the vital waterways in the Arctic because of the support and cooperation of our international partners, allowing us to be present together where and when it matters,” he said.

The waters east of the Varanger fjord is not totally new for the Norwegian Navy. Spokesperson Ivar Moen with the Joint Head Quarters says both frigates and Coast Guard ships have exercised outside the Kola Peninsula previously, but then in joint training with Russian Northern Fleet ships, and prior to 2014.

Russian navy ships have by several occations after 2017 exercised in Norway’s exclusive economic zone, both in the Barents Sea north of Finnmark and in the Norwegian Sea, west of Helgeland and Andøya, last year as a surprise part of exercise Ocean Shield.