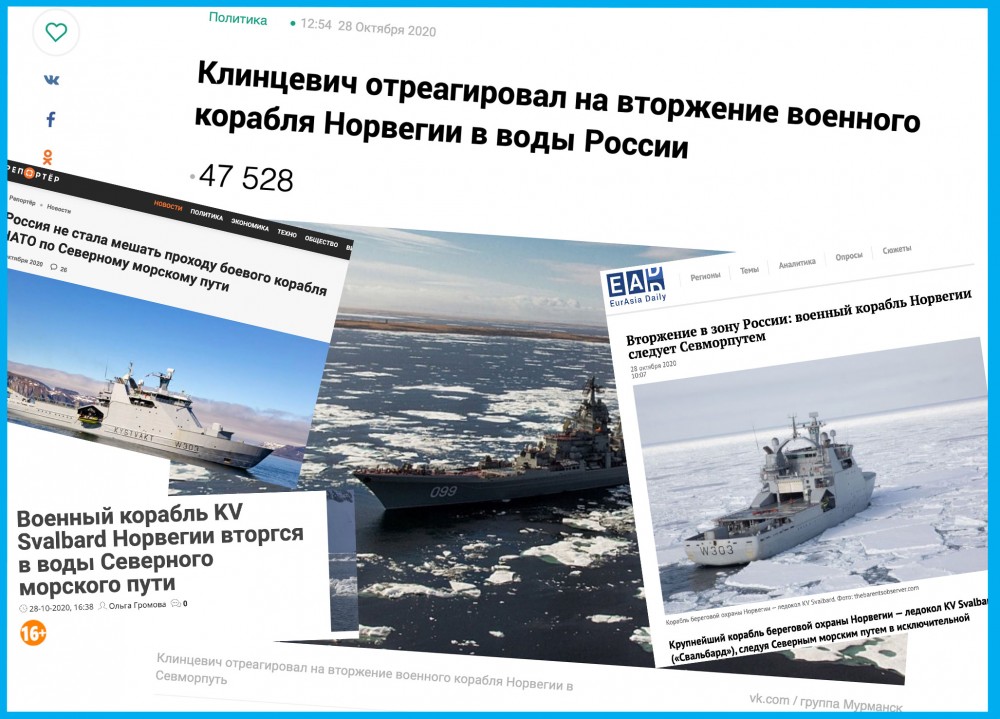 More than 30 different Russian media outlets, most of them little known, have covered the story about KV Svalbard's voyage. Parts of the texts purposely present propaganda and disinformation.

Is really KV Svalbard's voyage far north of Siberia happening without informing Russia and as a deliberated military provocation on behalf of the United States?
Read in Russian | Читать по-русски
By

Earlier this week, The Barents Observer reported about the Norwegian Coast Guard vessel’s transit sailing from the Barents Sea to the Beaufort Sea. The voyage from Longyearbyen went north of Svalbard, Franz Josef Land and Severnaya Zemlya, before continuing along the ice edge through the Laptev Sea. Friday morning, KV Svalbard is sailing in the partly ice-covered waters of the East Siberian Sea.

Destination is the Beaufort Sea north of Alaska. Here, three moored instruments vital for measuring temperatures in the Arctic Ocean are to be recovered as part of an international climate study.

The story was soon picked up by various media outlets in what seems like a coordinated attempt to mislead the readers to believe the Norwegian Coast Guard vessel is an armed NATO warship provocatively sailing into Russian Arctic waters without permission.

The newspaper Reporter quotes some few facts from The Barents Observer, but then wrongfully adds: “It should be noted that the voyage of Svalbard through the northern Russian seas takes place without any permission or notification from the relevant Russian authorities.”

Like several other media, also Reporter notes that “Moscow has repeatedly made statements that it considers this region its own, of which access is prohibited by the [NATO] Alliance’s fleet.”

Many of the stories are more or less copies of each other. There is, however, a pattern in which the so-called troll factory in St. Petersburg is creator of the disinformation operation about the aim of the voyage.

The Federal News Agency headlines its story with a claim of a Norwegian “intrusion” into Russian waters. Followed by a photo of a warship, not KV Svalbard, but the Russian Northern Fleet’s powerful nuclear-powered battle cruiser Pyotr Velikiy sailing in ice.

KV Svalbard came to the waters of the Northern Sea Route without prior approval from Russia, the Federal News Agency tells and continues with an interview with hardliner politician Frants Klintsevich, until late September this year a member of the upper house of the Russian Parliament’s Security and Defence Committee.

He says the Arctic is a delicacy in which many are interested.

“The United States is trying to conduct provocations through countries that are formally considered sovereign,” Klintsevich states, more than hinting that Norway has no own sovereign will.

“Thus, they [the United States] are trying to check the reaction of Russia, how it will react to it, what actions it will take.”

Klintsevich calls for Russia to stop the provocation by the Norwegian warship.

“We must be ready for this. Russia, if necessary, will stop the Norwegian warship’s violation of the state border. Russia will not allow being squeezed out of its territories,” Klintsevich underlines in the interview.

If to believe the counter, the article has so far had more than 72,000 readers.

The Federal News Agency (FAN) is known for its pro-Kremlin propaganda. The alleged money man associated with FAN is oligarch Yevgeny Prigozhin, a buddy of President Vladimir Putin and operator of the Internet Research Agency, known as the “troll factory” in St. Petersburg.

According to RBC, the Federal News Agency and its subsidiaries all started up on the same address as the so-called Troll Factory in St.Petersburg. «From the Troll Factory has grown a Media Factory,» the RBC reported in 2017.

Yevgeny Prigozhin, is also believed to be associated with the so-called Wagner Group, the quasi-independent military group that has engaged in a series of dubious operations in international conflict areas.

Frants Klintsevich’s call to rebuff the Norwegian Coast Guard ship from the Arctic is mirrored by a few other of the Prigozhin’s troll media, like the Polit Expert and Polit Rossiya.

EurAsia Daily is incorrectly taking texts from The Barents Observer article and presents them as quotes from the Norwegian military. EurAsia Daily is a news agency describing itself to provide objective coverage of political and socio-economic processes, with correspondents and observers working in countries of the Eurasian Economic Union, plus Ukraine and territories de facto occupied by Russia; Abkhazia, South Ossetia and Transnistria.

Newspaper Reporter underlines that KV Svalbard is an armed warship, unlike the French Navy ship BSAH Rhône which sailed the Northern Sea Route in 2018 without weapons. The text states that additional to the 57-mm Bofors naval gun, the Norwegian warship icebreaker brings a NH90 helicopter placed on the deck “capable of using anti-submarine weapons.”

“KV Svalbard does not bring a helicopter for this mission,” he says.

“There is absolutely no drama with this voyage. We are glad to assist the researchers to recover the scientific moorings in the Beaufort Sea,” Hayes underlines.

“This is for the benefit of everyone. A good civilian-military cooperation.”

Spokesperson Jørn Hammarbeck with the Norwegian Joint Headquarters in Bodø says there has been no negative reactions from Russia. “There are no reasons for that either,” he adds.

“The voyage take place in international waters and is aimed at supporting climate research,” Hammarbeck says.

Commander Senior Grade with the Norwegian Coast Guard, Nils Samland, says in an email to The Barents Observer that the voyage is first time the Coast Guard is sailing so far east into the Russian Exclusive Economic Zone.