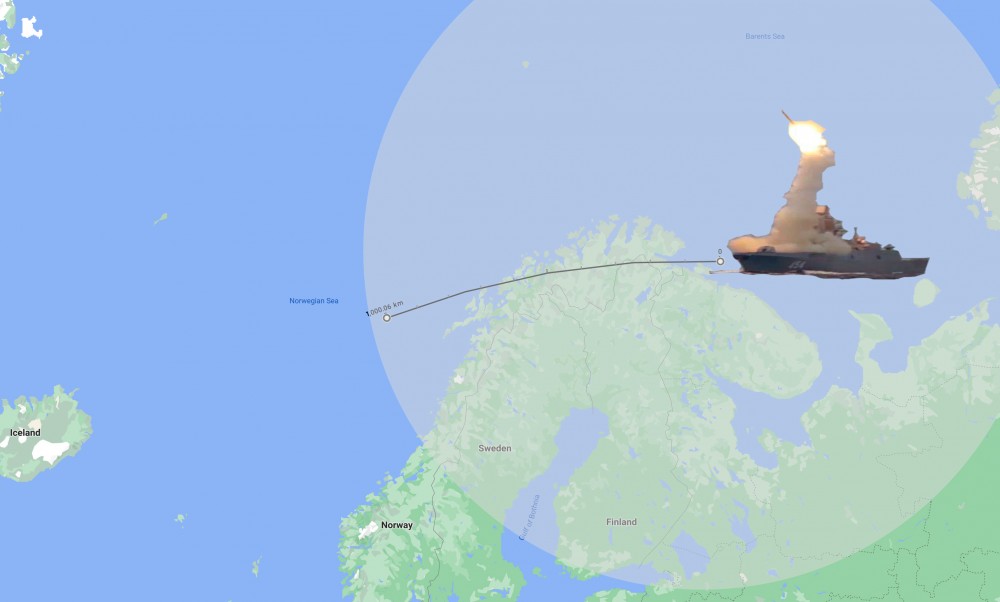 Launched from the Russian sector of the Barents Sea, the Zirkon missile can reach targets in the Norwegian Sea outside the coast of Nordland. Illustration: Barents Observer / Google map

From the Russian sector of the Barents Sea, the new missile can reach targets in the Norwegian Sea in about 10 minutes after launch if the Northern Fleet chose to activate its Bastion defence concept.
Read in Russian | Читать по-русски
By

Warnings are issued for larger areas of the Barents Sea from November 3 to 8. The Port Administration for Northwestern Russia has marked two zones with “missile firing” and consequently forbidden for sailings between 03.00Z and 18.00Z throughout the period.

One zone is east and north of the Fishermen Peninsula, while the other is east of Delniye Zelentsy oft the coast of the Kola Peninsula, as marked by @MatchlessMan410, a blogsite monitoring the Russian navy’s weapon testings.

The missile test will be at a range of about 1,000 km and with a target imitating an enemy ship.

While both the launch and the target will be in Russian waters, the range of 1,000 km will, if successful, prove the new missile’s capabilities to take out sea targets as far away as outside the Lofoten archipelago in the Norwegian Sea. These waters are of strategical importance in Russia’s so-called Bastion defence concept aimed at protecting the Northern Fleet’s ballistic missile submarines in case of an escalating international conflict.

The Tsirkon missile will also help protecting the Bear Gap, a line from Svalbard, via the Bear Island to the North Cape, aimed at hindering NATO ships from sailing into the Barents Sea in a war scenario.

This is the first time the Tsirkon missile will be tested at a distance of 1,000 km.

In October, Admiral Gorskhov test launched the missile from a position in the White Sea and with a target in the Barents Sea. The launch was first time the missile hit a target at sea. The flight across the Kola Peninsula took 4 and half minutes and the range was 450 km.

The 3M22 Tsirkon missile (NATO name SS-N-33) can fly at Mach 8, eight times the speed of sound, making it the fastest sea-launched cruise missile in the Russian navy. The missile will be deployed on the new class of frigates, but also the nuclear-powered battle cruisers Pyotr Velikiy and Admiral Nakhimov will be armed with the new hypersonic cruise missile.

According to TASS, three tests will be carried out from Admiral Gorshkov before the end of the year, including one test towards a target simulating an aircraft carrier.

During NATO’s Trident Juncture exercise in 2018, the US aircraft carrier USS Harry S. Truman sailed north of the Arctic Circle in the Norwegian Sea for the first time since the collapse of the Soviet Union. The carrier stayed in the waters around Lofoten archipelago.