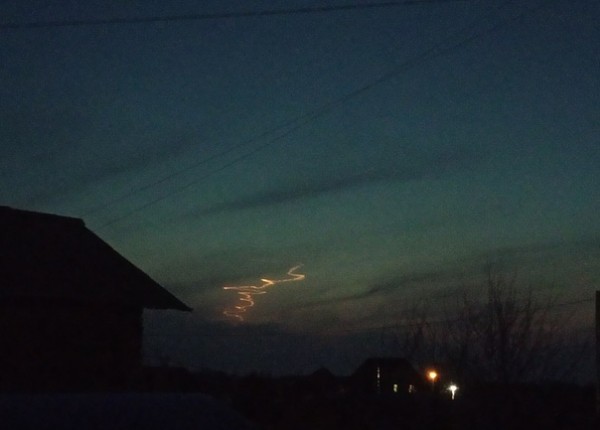 The April-test creased a spectacular trace of the missile that could be seen in the skies above the Komi Republic. Photo courtesy of Komiinform.ru

A top-secret missile launched from the Plesetsk cosmodrome in Arkhangelsk region earlier this week was a weapon capable of destroying satellites in low orbit.

Indications of a launch from Plesetsk came as NOTAM warnings were issued for three areas in the Russian Arctic in a straight line north from the cosmodrome. The areas were coincident with the fall-down of different stages of a space missile; east of Cape Kanin, over Novaya Zemlya and the last over Severnaya Zemlya.

Probably “Nudol” from Plesetsk will be launched on December 16, reserve date December 20.

On December 14, the launch of “Angara-A5” from Plesetsk.

Is it possible that “Angara-A5”, in addition to the satellite, should launch a real target for the “Nudol”? pic.twitter.com/3jfILvoVTX

Pentagon considers the missile test as a rapidly advancing threats to its own space systems.

“Russia publicly claims  it is working to prevent the transformation of outer space into a battlefield, yet at the same time Moscow continues to weaponize space by developing and fielding on-orbit and ground-based capabilities that seek to exploit U.S. reliance on space-based systems,” says commander of the U.S. Space Command, Army General James Dickinson.

According to the Space Command, Russia is developing several types of anti-satellite weapons. This week’s test is a missile launched from earth that can directly hit an enemy satellite and take it out. A second weapon under development is an on-orbit kinetic weapon. Based in space, such weapons could take out targets from orbit, in orbit. The U.S. Space Command also points to the on-ground combat laser systems currently under development by the Russian Space Forces.

“Russia has made space a warfighting domain by testing space-based and ground-based weapons intended to target and destroy satelites, according to the statement by General Dickinson.

According to him, Russia demonstrated its on-orbit kinetic weapon system in 2017 and again in 2020. No details were attached to the statement.

In April this year, the Barents Observer reported about this year’s first anti-satellite missile test from Plesetsk. That missile made a spectacular trace above two remote villages in the Komi Republic, north of the cosmodrome in northern Russia.