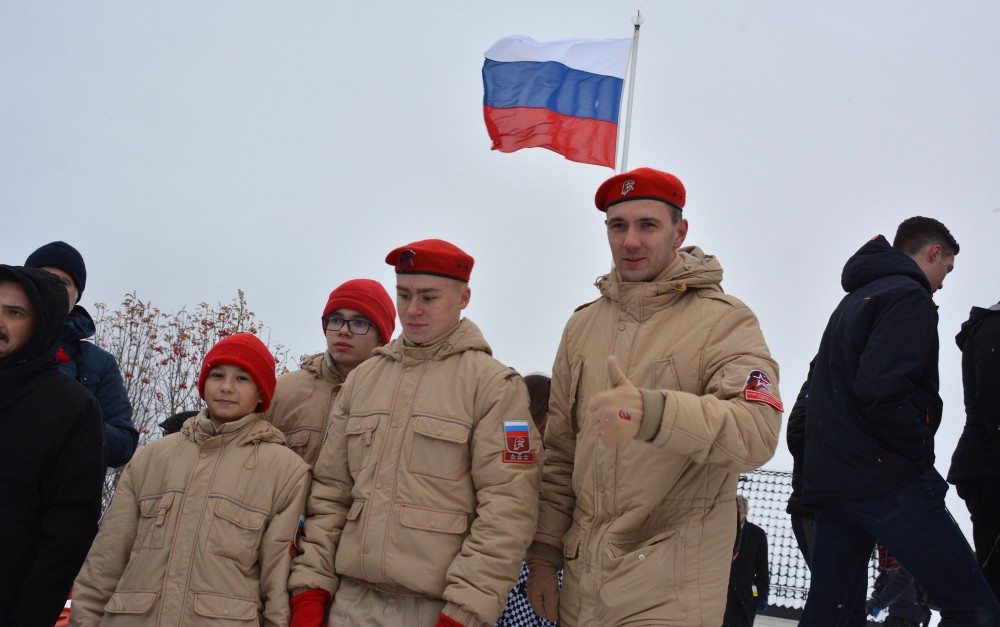 Thumbs up for Yunarmiya in Murmansk. Photo: Atle Staalesen

An agreement between the militarized youth organization and the Murmansk regional government includes the opening of Youth Army units in every school.
Read in Russian | Читать по-русски
By

The movement that is directly subordinated to the Russian Armed Forces makes another advance into the education system of the Kola Peninsula.

The agreement signed this week by regional Minister of Education Olga Dzyuba and Yunarmiya (Youth Army) leader Almaz Biktimerov includes an ambition to boost the presence of militarized youngsters in the school system.

According to Minister Dzyuba, the school system and Yunarmiya have overlapping objectives — to provide patriotic education to the young generation.

“I am confident that the agreement signed today will be several times prolonged because the work that we will do together on patriotic education, training in healthy lifestyles and cultivation of traditional values is very, very important,” the minister underlines.

She makes clear that the two parts have cooperated actively also before signing of the formal agreement.

According to regional Yunarmiya leader Biktimerov, the two parts will now together work for a surge of Youth Army members. And the target is to have Yunarmiya units in ever school, he underlines.

The Yunarmiya was established on an initiative by Russian Defense Minister Sergey Shoigu in 2015. The organization is fully financed by the Defense Ministry and today has more than 744,000 members, some of them only eight years old.

The mission of the movement is to train future personnel for military service and promote patriotism and so-called “traditional values.”

The movement has a strong position in the Kola Peninsula and especially in the military towns that houses Northern Fleet bases.

In August, the Yunarmiya was key stakeholder in a cooperation deal signed by the Northern Fleet and Yalta, the city in Crimea. The agreement includes cooperation on patriotic education and summer camps.