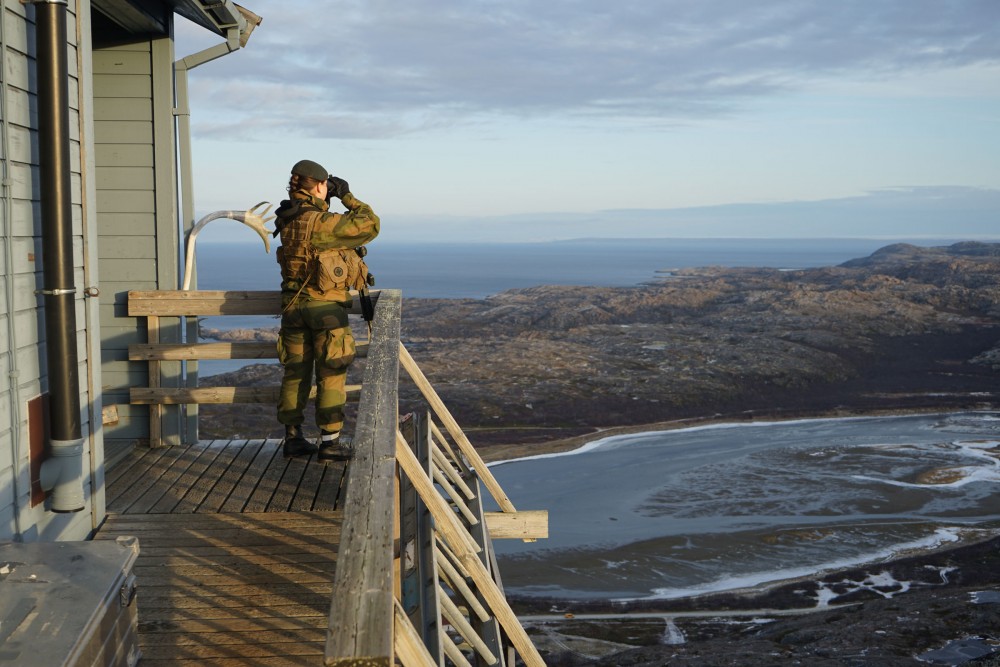 A Norwegian military border guard on watch at OP 247, looking out towards the Barents Sea. Russia's Sredny Peninsula visible in the horizon. The land-border goes in Grense Jakobselv. Archive photo: Thomas Nilsen

The missile cruiser “Marshal Ustinov” came from the western part of the Barents Sea, an area where Russia for the past few days have marked as “Impact area for Russian missiles.”

Sailing back towards the Kola Peninsula, the warship took an unusual path into the Varanger fjord, waters that mark the Russian-Norwegian maritime border.

“Such sailing west of the Fishermen Peninsula is something we haven’t seen in recent times,” said Major Brynjar Stordal, spokesperson with Norway’s Joint Headquarters.

He confirms it is a Slava-class missile cruiser.

“Marshal Ustinov” is the third largest warship sailing for the Russian Northern Fleet, after the aircraft carrier “Admiral Kuznetsov” and the nuclear-powered missile cruiser “Pyotr Velikiye”.

As previously reported by the Barents Observer, the “Marshal Ustinov” sailed out from Severomorsk earlier in February.

“The vessel sailed in to the waters west of the Fishermen Peninsula this weekend, in international and Russian waters,” Stordal said in a phone interview.

Norway’s military is monitoring the movements of the Russian warship, Stordal said.

The Barents Observer is not aware of any similar sailings with larger Russian warships so close to Norway’s maritime border in the Varanger fjord anytime in post-Soviet history. Normally, the Northern Fleet’s vessels are sailing north of the Fishermen Peninsula on voyages to and from the western part of the Barents Sea.

The voyage very close to Norway’s maritime border outside Grense Jakobselv takes place the same day as US Air Force B1 bombers landed at Ørland Air Base near Trondheim, some 1,200 kilometers south from the border to Russia.

B-1B Bombers from Dyess Air Force Base @usairforce
landed at Ørland Airbase today. This is an important training mission for the Norwegian Armed Forces together with allies.@US_EUCOM @NATO_AIRCOM @usembassyoslo pic.twitter.com/e89iX2FUAD

“Marshal Ustinov” is 186 meters long and was commissioned in 1986. The warship has Severomorsk north of Murmansk as homeport.