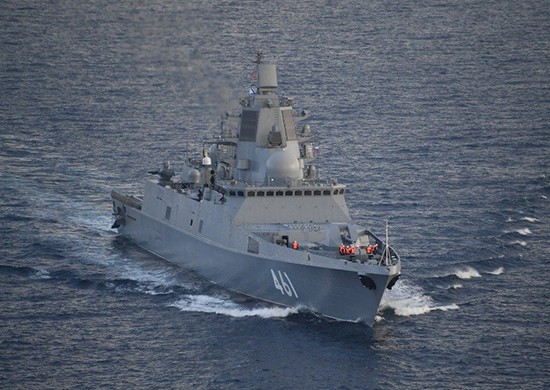 Commissioned in July 2020, the "Admiral Kasatonov" is the newest frigate in the Northern Fleet. Photo: Russian Navy

This is the first time Russia’s Northern Fleet is tasked to serve fishing vessels in waters that are part of Norway’s Economic Zone.
Read in Russian | Читать по-русски
By

The Admiral Kasatonov sails together with the large navy tug Nikolay Chiker and the navy tanker Vyazma. The Northern Fleet vessel group entered the Norwegian Sea from the south after a long-distance deployment that started last December.

Sunday morning, the ships are southwest of Ørland Air Base, where Norway’s fleet of F-35 fighter jets is located.

Only the tug and the tanker have the AIS turned on, making their location visible on civilian vessel traffic tracking systems.

“A task force of ships and support vessels of the Northern Fleet, led by the frigate Admiral Kasatonov, has entered the Norwegian Sea. For several days, navy sailors will practice search for submarines using the onboard sonar equipment, and will also ensure the safety of Russian fishermen in the fishing areas,” the Fleet’s press office reported on Saturday.

For now, the vessel group keeps a steady course northbound towards Murmansk.

It is normal for Northern Fleet warships to sail along the coast of Norway. In recent years, even missile drills have been practiced in international waters west and south of North Cape.

However, ensuring the safety of Russian fishermen in waters part of neighboring Norway’s economic zone has not previously been highlighted as a dedicated task.

In Norway, focus is high on search- and rescue in northern waters. A new SAR-helicopter base will be established in Tromsø, additional to the existing resources at Bodø, Banak and Longyearbyen.

In 2002, the naval destroyer Severomorsk sailed to the fishery protection zone near Svalbard, a protection zone Russia at the time didn’t recognize as such. Although met by skepticism in Oslo, the voyage was by Moscow explained as a routine maneuver aimed at inspecting Russian flagged fishing vessels in the area.

The economic zone extends 200 nautical miles from Norway’s territorial boundary. The country does not have full sovereignty in the area, but rather sovereign rights over natural resources in and on the seabed and in the waters above.

Russia and Norway share the quotas for joint fish stocks up north, like the cod. Within the economic zone, as well as in the fisheries zone around Jan Mayen in the Norwegian Sea, Norway’s coast guard is in charge of the legal control.

Armed with Oniks and Kalibr cruise missiles, as well as an antisubmarine torpedo complex, Admiral Kasatonov is the second of the Russian navy’s new class of frigates, entering service in July 2020.

The warship has the Northern Fleet’s main naval base Severomorsk on the Kola Peninsula as homeport.

Since leaving Severomorsk on December 30, the frigate has sailed the Atlantic and Mediterranean, making friendship port calls in Turkey, Syria, Cyprus, Greece, Egypt and Algeria.

The press statement of the Northern Fleet said the frigate later will conduct a number of combat training tasks in the Barents Sea before calling on Severomorsk.