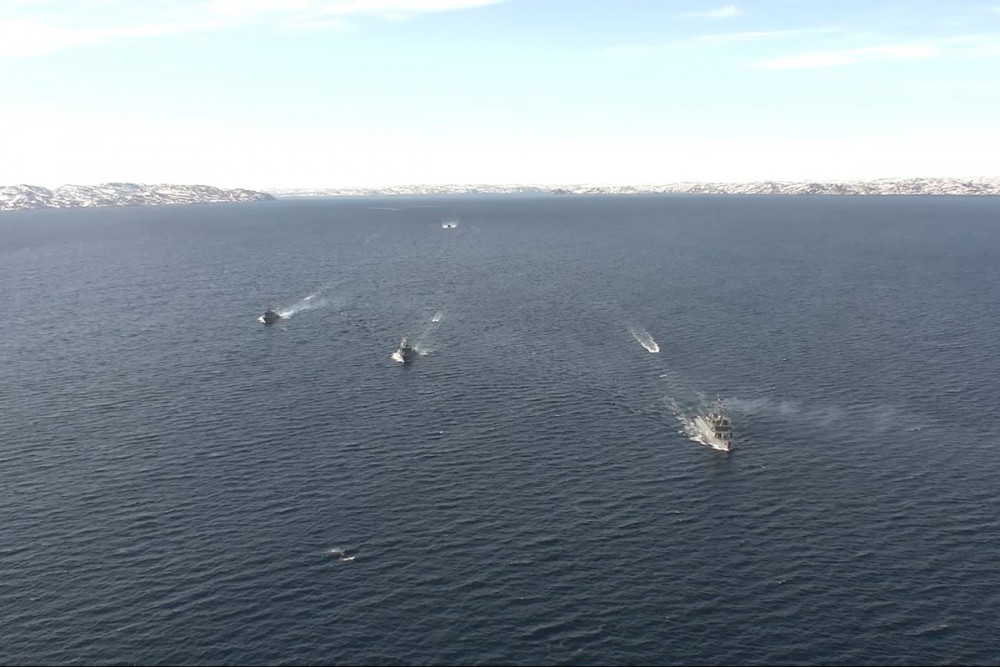 NATO aircraft are in the skies over the Barents Sea watching as nuclear- and diesel submarines, surface warships, support vessels on Monday sailed out from the Kola Peninsula.
Read in Russian | Читать по-русски
By

The large military exercise comes less than a week after Defense Minister Sergei Shoigu visited the Headquarters of the Northern Fleet. In his address in Severomorsk, Shoigu underlined that the USA and its NATO allies are building up marine forces along Russian borders.

The strengthened military presence is evident also in the Arctic, the Defense Minister said.

“The USA and its allies are boosting their military concentration in the Arctic, they increase the intensity of military preparedness and expand and modernize military infrastructure,” Shoigu said.

The numbers of warships taking part in the exercise this week are not detailed, but the press service of the Northern Fleet has published photos showing a flotilla of five surface vessels sailing out from the Kola Bay.

That includes two anti-submarine corvettes of the Grisha class and three mine-sweepers, the photos show.

In addition, one Delta-IV ballistic missile sub from the Gadziyevo, other nuclear submarines, and diesel-electric submarines from Polyarny are said to participate.

The Northern Fleet said in the statement that the exercise is an interspecific command-staff drill taking place under the leadership of Navy commander-in-chief, Admiral Nikolai Yevmenov.

The first stage includes the deployment of nuclear submarines and naval forces into the sea. On land, army marines units are moved to their pre-defined areas, while air force and air defence units have started to transfer to operational airfields in the Arctic.

Particular attention during the exercise will be paid to ensure the safety of Russia’s economically important facilities in the Arctic, the press statement of the fleet said.

Two NATO maritime patrol aircraft, a US Navy P-8A Poseidon and a Norwegian P-3 Orion were met by a Russian MiG-31 fighter jet over the Barents Sea on Monday, news agency Interfax reported.

After the foreign military aircraft turned away from the state border of the Russian Federation, the fighter jet returned to the base, the military informed Interfax.

Although not linked directly with the Northern Fleet exercise, the press service of the Defence Ministry could inform about 10 long-range strategic bombers taking part in cruise missile shootings towards ground targets in the Komi Republic on Sunday.

Both Tu-95 and Tu-160 bombers participated, and an Il-78 tanker provided for mid-air fueling of the strategic bomb planes.

Simultaneously as the major exercise started in the Barents Sea region, the Northern Fleet’s large landing ship “Aleksandr Otrakovsky” sails the Black Sea together with landing ships transferred from the Caspian Flotilla.

The vessels are exercising unloading of anti-aircraft missile systems and other military equipment.

Also, the Northern Fleet’s landing ship “Kondapoga” was this weekend observed in the Bosphorus sailing into the Black Sea.

Russia is currently building up huge military forces near its southern border to Ukraine.

The Defence Ministry has posted this video showing both naval forces, anti-aircraft missile units and navy soldiers on Kola.