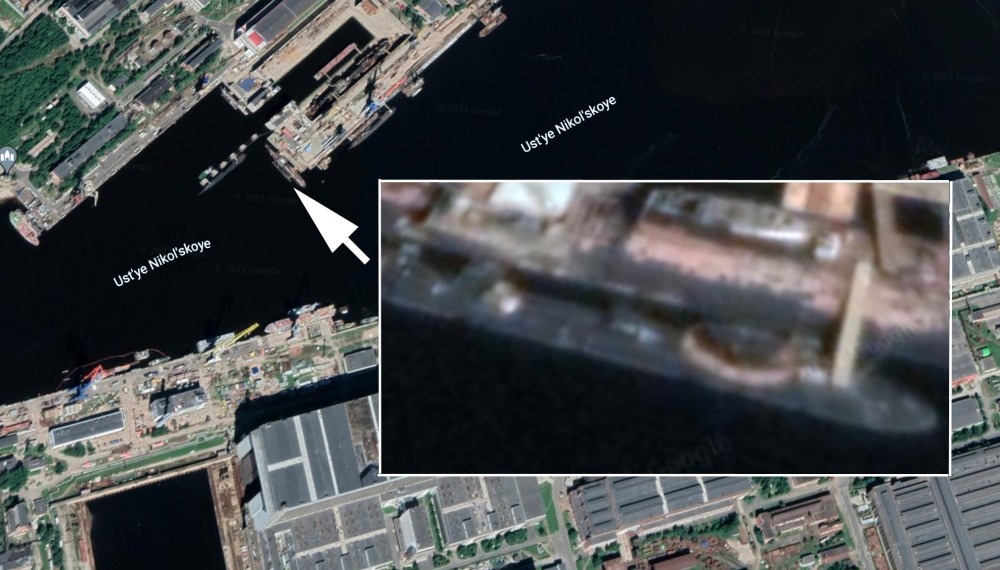 Losharik is at quay on the Zvezdocka side of the naval yards in Severodvinsk. Photo: Google Earth / Barents Observer

After long delays and one month of preparation, the spent nuclear fuel elements are now lifted out of the reactor, paving the way for modernization of the mysterious deep-diving spy-submarine at the yard in Severodvinsk.
Read in Russian | Читать по-русски
By

On July 1st, 2019, Russia’s Russian deep-diving nuclear-powered submarine AS-31, nicknamed Losharik, was seriously damaged in a fire, killing all 14 officers on board. The accident happened as the sub was working on sea-floor installations in the Motovskiy Bay not far from Russia’s maritime border to Norway.

After the accident, AS-31 was transported to Zvezdochka, a part of the Russian state-owned United Shipbuilding Corporation and Russia’s largest ship repair center, located in Severodvinsk on the coast of the White Sea.

In March this year, specialists at the yard completed the task of extracting the deep-diving submarine’s nuclear reactor core.

Losharik was supposed to originally undergo restorations in 2020, however, the reconstruction was postponed and rescheduled for 2021. According to state-affiliated news agency TASS, the operation lasted approximately one month and happened without problems. A source speaking to TASS, who claims to have close connections to the Russian Defense Ministry, states that Losharik is now starting to undergo restoration after the fire and modernization.

Losharik is constructed from seven, spherical, titanium hulls. The front five hulls are interconnected, while the last two are paired up and hold AS-31’s nuclear reactor and machinery. According to TASS’s source, the deep-diving submarine’s titanium hull suffered practically no damages. The nuclear reactor itself, powering the submarine, will not be replaced and are ready to work with the new uranium fuel elements in place.

The submarine, which was first laid down in 1988 but was only launched in 2003 due to financial issues, could be utilized for deep-sea operations down to depths of six kilometers.

Based on project 19831’s objectives, under which Losharik operates, AC-31’s tasks include providing light for surrounding landscapes, exploration missions, and manipulating various external products, such as installing sensors and cutting underwater cables, according to Lenta.

Particularly the latter has raised concerns regarding Russia’s potential for using AS-31 for submarine cable interference against adversaries.

Forbes has previously emphasized the capability of Russian submarines to damage underwater cables running from the United States to mainland Europe. Navy Lookout has also emphasized the vulnerability of “the world’s communications backbone” with regards to the threat of Russian submarine interference, which became all the more advanced and recurrent after the Cold War.

Details, however, are highly secretive.