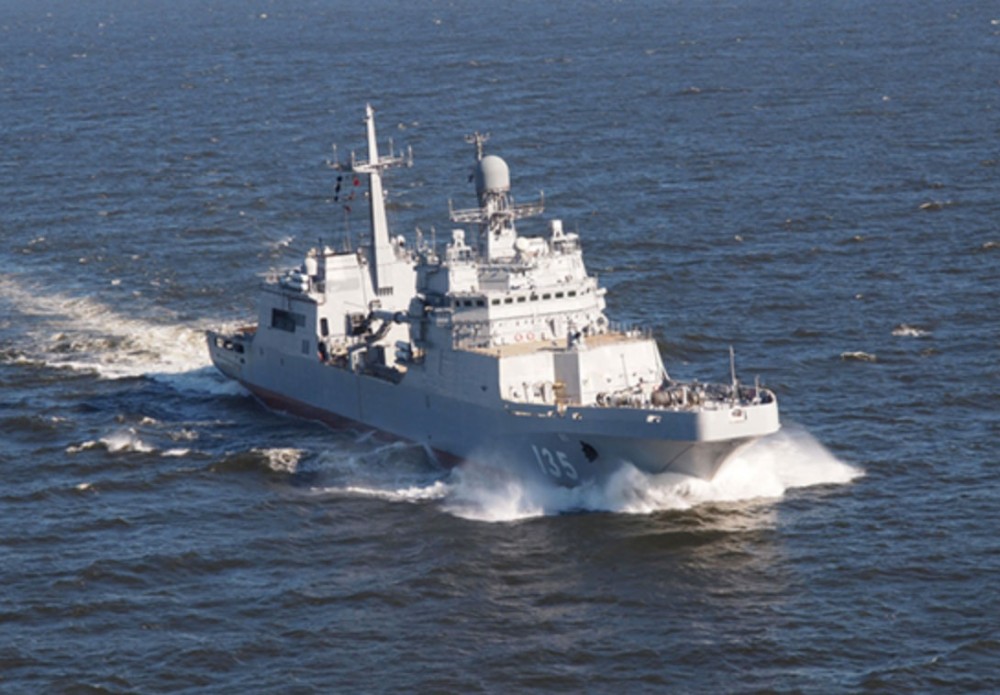 The Pyotr Morgunov in the Barents Sea. Photo: mil.ru

The Northern Fleet tests its brand new landing ship in the bay located few kilometers from the border to Norway.
Read in Russian | Читать по-русски
By

The Pyotr Morgunov this week cruised into the far northern bay on the Barents Sea coast few kilometers from Norway. The ship drifted onto the shore, whereupon armored personnel carriers, trucks and a big number of special operations soldiers got onboard.

The landing vessel is the Russian Navy’s newest ship of the kind, incorporated in the Northern Fleet early this year.

According to the Northern Fleet press service, the loading of the Pyotr Morgunov was part of a rehearsal aimed at testing vessel capacity.

Several dozens of vehicles were taken onboard the ship, including more than 30 BTR-80 personnel carriers and trucks, as well as a battalion of special forces from the nearby base of Sputnik.

Following the loading operation, the landing ship set out to the Barents Sea where it teamed up with missile cruiser Marshal Ustinov, anti-submarine vessel Vice-Admiral Kulakov and support ship Altay in an exercise.

The loading operation in the Pechenga Bay follows a similar operation by sister ship Ivan Gren few weeks ago.

The 135 meter long Pyotr Morgunov is the newest vessel in the powerful Russian fleet, and the second large landing ship of Project 11711. It follows its sister ship Ivan Gren that was incorporated in the Northern Fleet in 2018. Both vessels are built at the Yantar yard in Baltiisk.