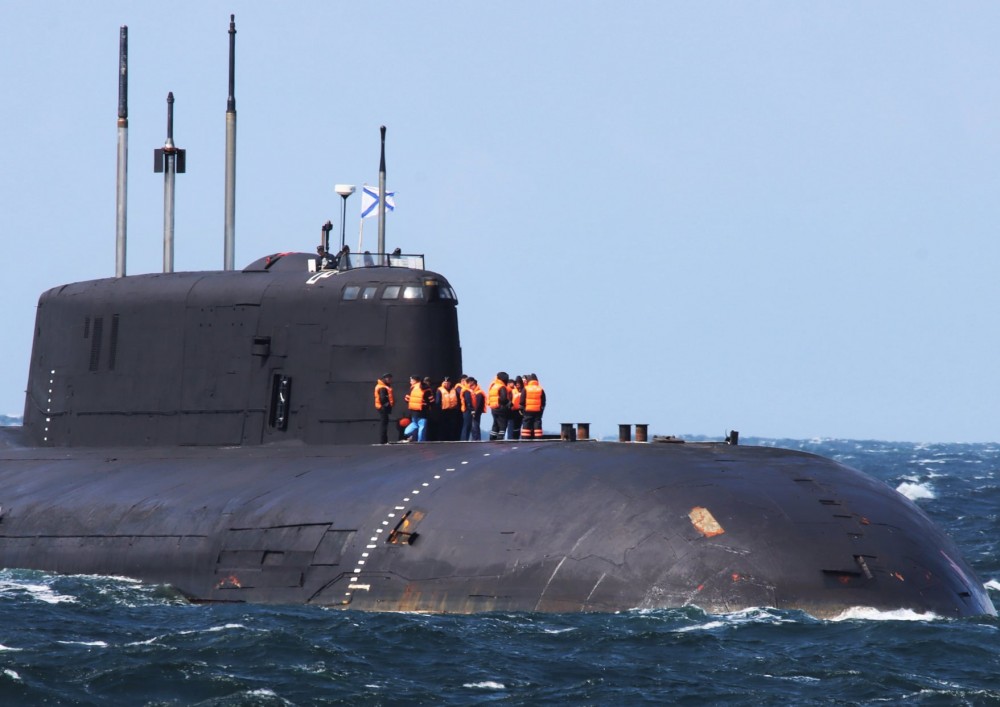 Crew on deck made ready for tow as Orel drifted at 1,5 knots towards the Danish Island of Sejerø between Sjælland and Jylland. Photo: Royal Danish Navy / 3. Eskadre

Danish Navy describes the situation as “dramatic” when the giant Oscar-II class submarine “Orel” drifted at 1,5 knots towards the island of Sejerø. Ropes were prepared for towing and two other Russian warships came to assist.
Read in Russian | Читать по-русски
By

“Orel” was sailing together with the navy tug “Altay” and the large anti-submarine missile destroyer “Vice-Admiral Kulakov” in an inter-fleet transit from St. Petersburg towards the Kola Peninsula when it got problems with propulsion and started to drift.

The incident happened on July 30 in the busy waters east of Denmark’s second-largest city Århus. “Orel” and the two other Northern Fleet vessels had a few hours earlier sailed under the Great Belt Bridge en route out of the Baltic Sea towards Skagerak.

The nearly 30-years old Oscar-II class submarine is powered by two nuclear reactors and is normally armed with cruise missiles and torpedoes. The class is infamous for the terrifying accident with “Kursk” on August 12, 2000, when an explosion in the torpedo compartment blow off the front part of the submarine that sank and killed all 118 crew members on board during an exercise in the Barents Sea.

“Orel” is one of three remaining Oscar-II class subs in the Northern Fleet, all based on the Kola Peninsula.

As normal when Russian navy ships are in transit through territorial waters of Denmark, the Danish navy is on watch. Last Friday, it was “HDMS Diana” patrol vessel that escorted the Russian submarine and warships. On its Facebook page, the crew describes the situation as dramatic.

“The escort out of the Baltic Sea will go down in history as both dramatic and exciting, as the nuclear-powered submarine “Orel” of the Oscar-II class had problems with propulsion and lay dead in the water at Sejerø, where it drifted with 1,5 knots towards the island,” the crew on the Danish patrol vessel writes.

They elaborate by explaining how they could see a crowd of crew members came out on the front deck of “Orel”, all wearing life jackets.

The Northern Fleet navy tug “Altay” came closer and ropes were prepared for towing the large submarine. “MDMS Diana” offered help, but such assistance was “politely but nor surprisingly refused,” the Danish navy writes.

Radio communication did not take place directly with the submarine, but was answered by the crew on the Russian destroyer “Vice-Admiral Kulakov”.

After a while, the Russian submarine managed to get going again and all the rigged gear for towing was taken down.

“From Diana, we closely followed the situation on the submarine and our thought quickly turned to the film The Hunt for the Red October when we saw all the people on the deck of the submarine,” the crew on the Danish patrol vessel said and added: “VERY exciting to witness up close.”

The Russian navy has not posted any information about why the submarine lost proposition or if the incident was linked to the operation of the nuclear reactors or any other parts of the auxiliary systems.

The press service of the Northern Fleet is not allowed to speak directly to foreign media, including the Barents Observer.

As the nuclear submarine’s propulsion was restored in time to avoid a larger accident, the Russian navy ships continued north into Skagerak, the waters between Denmark and Norway’s southern tip.

At first, the submarine sailed in surface position, but it has now submerged underwater, Norway’s Joint Headquarters tells the Barents Observer.

The Norwegians are closely following the voyages with the Russian warships now sailing north outside the coast towards the Northern Fleet’s home bases at the Kola Peninsula.

“It is always worrying when a vessel of this type has problems with propulsion,” says spokesperson Major Elisabeth Eikeland with the Joint Headquarters.

She says it is normal that Russian submarines during such inter-fleet transits are followed by their own support and auxiliary vessels.

“But we also expect Russian authorities to contact us if they again have problems with this or other vessels in waters near Norway,” Major Eikeland underlines.

Additional to the nuclear-powered submarine “Orel” several other Northern Fleet warships are currently sailing north after participating in the Main Naval Parade outside St. Petersburg on July 25.

Currently outside Norway are the two nuclear-powered submarines “Vepr” and “Knyaz Vladimir”. While “Vepr” is an Akula-class multi-purpose sub, the “Knyaz Vladimir” is the Northern Fleet’s newest ballistic missile sub of the Borei-class.

A diesel-electric submarine of the Kilo-class, the “Vladikavkaz” will also sail north towards its home base in Polyarny. Last to sail out of the Baltic Sea was the large landing ship “Pyotr Morgunov”.

As previously reported by the Barents Observer, the Northern Fleet has said the navy ships will conduct combat training while in transit up north.

“During the inter-fleet transition to the permanent deployment bases, the ships of the Northern Fleet will perform a set of combat training missions as part of various naval formations, which will be formed for the purpose of conducting a number of tactical exercises,” the press service of the Northern Fleet said.

“So far, no activity has been carried out beyond transit sailing,” she says.

The spokesperson would not elaborate on the current position of the Russian ships more than saying “they are moving along the west coast [of Norway].”

Russia has currently not issued any active NOTAM (Notice to Airmen) for weapon shootings anywhere in the Norwegian Economic Zone (EEZ).

In an August 2 news update, the press service of the Northern Fleet says the navy groups currently sailing north from St. Petersburg will “continue to work out planned combat training tasks…” and “…. will conduct a series of comprehensive defense and rescue exercises.”