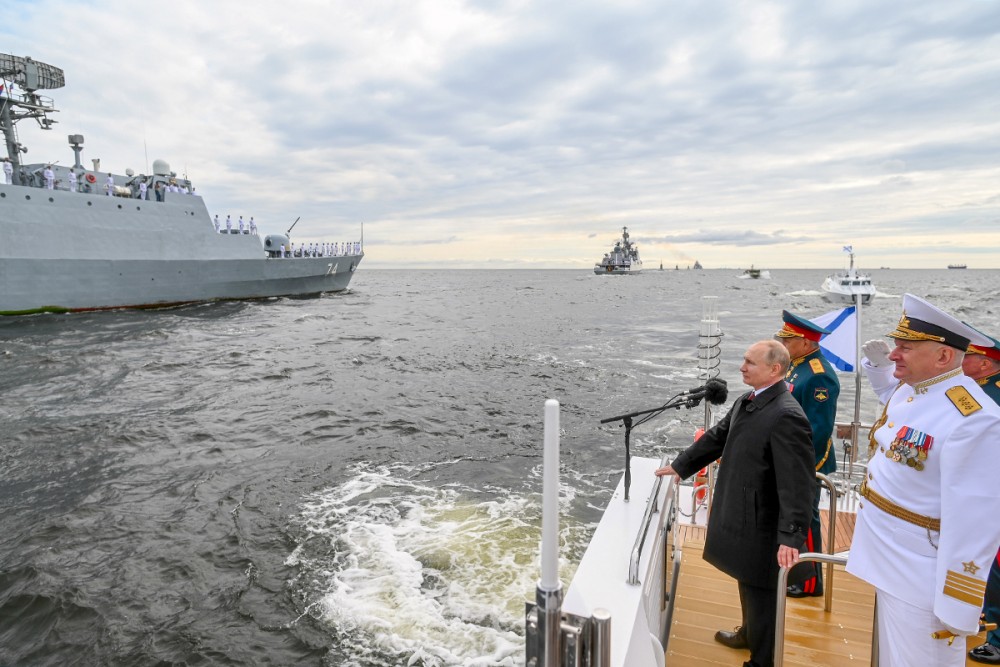 The first group of navy ships and submarines that participated in the naval parade in St. Petersburg last weekend sailed under Denmark’s Great Belt bridge Friday morning on their way north to the Kola Peninsula.
Read in Russian | Читать по-русски
By

Never has such powerful group of warships from the Northern Fleet previously been in the Baltic Sea. The vessels, now about to sail around Scandinavia in an inter-fleet transfer back to the bases along Russia’s northern coast to the Barents Sea, consists of three nuclear powered submarines, one diesel electric sub, a frigate, a large anti-submarine ship, a missile cruiser, a large landing ship, and several support vessels.

“During the inter-fleet transition to the permanent deployment bases, the ships of the Northern Fleet will perform a set of combat training missions as part of various naval formations, which will be formed for the purpose of conducting a number of tactical exercises,” the press service of the Northern Fleet informs.

In his speech at the navy parade on July 25 in Kronstadt outside St. Petersburg, President Vladimir Putin praised the navy’s capabilities. “The Russian navy today has everything it needs to guarantee the protection of our country and our national interest,” Putin assured and warned possible adversaries.

“We can detect underwater, surface and aerial enemies and target them if a lethal strike is necessary.”

In 2019, also in what first was believed to be a regular inter-ship transfer from the Baltic Sea to the Kola Peninsula, the Russian navy suddenly launched a larger exercise west of Scandinavia consisting of about 30 ships and submarines from the Northern Fleet, Baltic Fleet and the Black Sea Fleet.

Named “Ocean Shield 2019”, the exercise was first announced to take place in the Baltic Sea, but with the surprise groupings in the North Sea and Norwegian Sea, Norway’s Defence Chief at the time said the objective of the exercise was to block NATO’s access to waters around Scandinavia.

Several NOTAM (Notice to Airmen) were announced outside Northern Norway, but no missiles were launched, the Barents Observer reported.

This August, no Russian military NOTAM warnings are currently announced for any parts of the North Sea, Norwegian Sea or the western Barents Sea.

The warships were shooting with artillery at surface sea targets in the Baltic Sea earlier this week, according to the press service of the Northern Fleet.

More Russian navy ships are currently en route in Danish waters. According to Marine Traffic, the cruiser “Marshal Ustinov” was south of Bornholm Friday morning. Although not visible for civilian AIS tracking systems, the Northern Fleet says the nuclear-powered Alula-class submarine “Vepr” (K-157) is sailing together with “Marshal Ustinov”.

The last group to sail out of the Baltic Sea will be the frigate “Admiral Kasatonov” and the ballistic missile submarine “Knyaz Vladimir” (K-549).

Russia's biggest naval vessels are out at sea