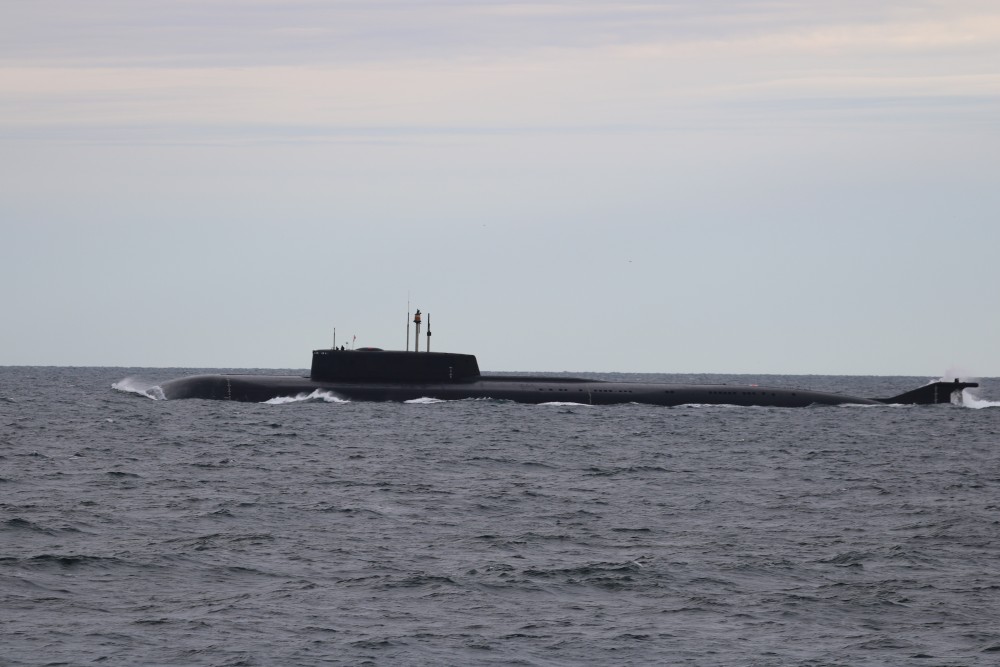 This photo of "Orel" is taken by the Norwegian navy which follows the nuclear-powered submarine along the coast sailing north.

18 years after Kursk disaster, a sister ship show off sailing all along Norway in surface position

Norwegian radiation watchdog says its round-the-clock alert-readiness is prepared to act in case of accident.
Read in Russian | Читать по-русски
By

A nuclear-powered Oscar-II class submarine, similar in design to the «Kursk» is currently outside Norway.

«Kursk» sank in the Barents Sea on August 12, 2000 after a torpedo exploded inside its tube, triggering a larger fire and explosion among the other torpedoes blowing up the entire front part of the submarine. All 118 on board were killed.

Moen will not speculate about why the nuclear-powered submarine is sailing all the way in surface position.

«Orel» is on her way home after participating at the naval parade in St. Petersburg on July 29th. Norway’s Coast Guard ship “KV Barentshav” is Thursday evening in the same area as the Russian submarine is sailing, according to MarineTraffic.

Last Saturday, the submarine sailed into Danish waters and passed under the Storebelt bridge early Sunday as previously reported by the Barents Observer. Denmark’s Radiation Protection authorities and the navy monitored the voyage closely.

Monday morning, «Orel» sailed into the North Sea south of Kristiansand in Norway and has since been in Norwegian waters. «This is considered a routine transit,» Ivar Moen tells and says it is not the first time Russian nuclear submarines sail in surface position on similar voyages.

Last summer, the Northern Fleet’s only remaining Typhoon-class, the «Dmitry Donskoy» sailed the surface from Severomorsk to St. Petersburg and return.

Unlike Denmark, Norway’s Radiation Protection Authorities (NRPA) does not take any particular measures regarding this submarine, but assures that the emergency preparedness monitoring is well fitted for possible accidents involving the nuclear reactors on board.

«Releases from a nuclear submarine in surface position is considered in our nuclear emergency preparedness plan,» says Ingar Amundsen, Head of Section for international nuclear safety with the NRPA.

«Such scenario is also a reason why iodine tablets were distributed to the municipalities,» Ingar Amundsen tells.

The decision was taken last year, argued to be needed because of an increasing number of nuclear submarines off Norway’s coast, both Russian and NATO vessels inside territorial waters. Iodine tables should be taken as preventative measure against thyroid cancer, especially for kids and teenagers. For the iodine tablets to have any effect, they must be taken within few hours after exposure of radioactive iodine following a nuclear reactor leakages.

NRPA has a wide range of online measuring stations for radioactivity all over Norway that will trigger an alarm in case of increased levels of any radionuclides.

The 155 meters long Oscar-II class is powered by two nuclear reactors. «Orel» (K-266) is 26 years old and was last year re-commissioned after a longer period of overhaul at the shipyard in Severodvinsk by the White Sea where she once was built and commissioned in 1992. There are tubes for a total of 24 cruise-missiles on board additional to the torpedoes, making this submarine one of the most powerful warships in the Russian navy.

The Northern Fleet has three Oscar-II class submarines still in service; «Voronezh», «Smolensk» and «Orel». They are based in Zapadnaya Litsa and Vidyayevo northwest of Murmansk on the Barents Sea coast.

«Orel» will sail outside Tromsø on Friday before turning east to the Barents Sea outside North Cape and is expected to enter Russian waters late Saturday evening.

When sailing south, the submarine was accompanied by the missile cruiser «Marshal Ustinov», the destroyer «Severomorsk» and the new frigate «Admiral Gorshkov». On return this week, «Marshal Ustinov» and «Severomorsk» turned south in the North Sea and sailed into the English Channel, the Royal Navy announced on Wednesday.

The ships entered the busy shipping lanes between Norfolk and continental Europe and were shadowed towards the Dover strait by by a British destroyer «HMS Diamond». On Thursday, the press service of the Russian Northern Fleet informed that the two vessels carry out a combat exercise mission in the North Atlantic.

It is a anti-submarine exercise aimed at training the crew in readiness for combat ise of weapons and equipment.