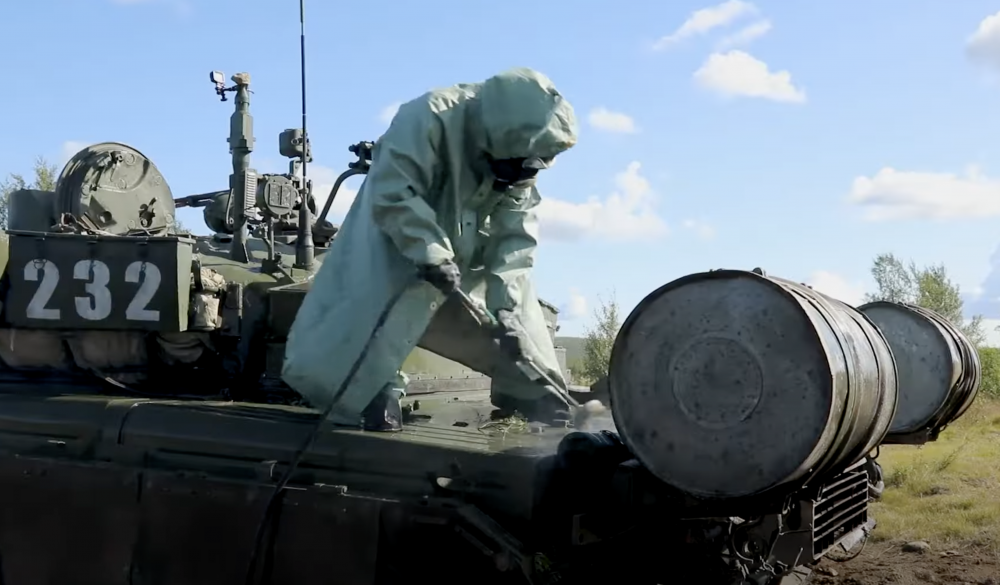 Soldiers with the Northern Fleet’s special unit exercised operations in a simulated radioactive contaminated war zone in the Pechenga valley, some 15 kilometers from the border to Norway.
Read in Russian | Читать по-русски
By

The threat and consequences from nuclear or radiological events remain as a real scenario for the 200th Separate Motor Rifle Brigade on the Kola Peninsula. Based in the Pechenga valley, the unit is one of the two Russian Arctic warfare brigades.

Fighting in a post-nuclear war environment, or handling a radiological terror attack, was the main task of Russian NBC (nuclear, biological, and chemical) Troops practicing together with the Arctic Brigade at the tankodrom and shooting range at Korzunova, a few kilometers east of the mining town of Zapolyarny.

The area of the exercise was attacked by a simulated enemy using weapons of mass destruction, the press service of the Northern Fleet informs.

A film (see below) from the exercise, posted by Russia’s Defense Ministry, shows how the first armored vehicle drives in front of a group with tanks into a contaminated area. An IMD-23 detector for measuring gamma radiation is installed in front of the driver.

Detecting, measuring, treating, and speedy decontamination of soldiers and military vehicles were practiced before an attack on the enemy’s weapons simulated weapons, and fuel deposits were conducted with tanks and bazookas.

At the exercise in the Pechenga valley, the danger is radiation, but the special NBC Troops are also tasked to deal with effects caused by chemical and biological weapons.

The Northern Fleet’s units in the Pechenga valley are currently participating in the large-scale exercise going on this week, involving warships and submarines, coastal troops, long-ranged navy aviation, and anti-aircraft units.

The exercise is a command and staff training aimed at assessing the degree of preparation of forces that next month will participate in the strategic exercise Zapad-2021.

Northern Fleet surface vessels and submarines have during the last week conducted war games in the waters north of Great Britain, simultaneously as other vessels have exercised in the Barents Sea, including the larger nuclear-powered missile cruiser “Pyotr Velikiy”.

Several larger areas in the Barents Sea are currently closed for civilian shipping as live shooting takes place during the exercise.

More than 10,000 soldiers, more than 100 armored vehicles, 15 aircraft, and about 30 surface vessels and submarines are involved, according to the press service of the Northern Fleet.