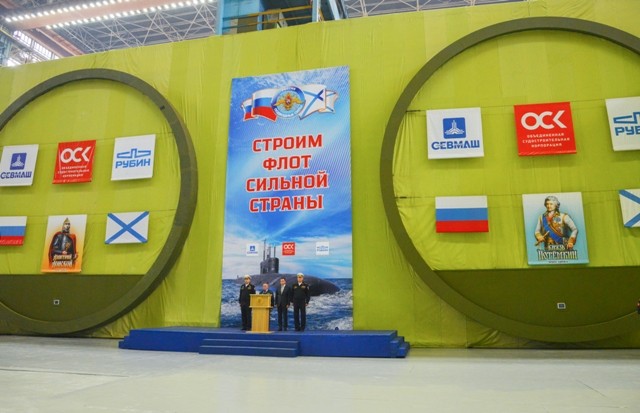 The keel plates were placed on the metal hulls of two side-by-side section-walls which will shape the two submarines as more compartments are added. Photo: Sevmash yard

Busy days are getting even busier for builders of Russia’s new fleet of the Borei class submarines. Keel laying ceremony for the ninth and tenth vessel in the class took place in Severodvinsk on August 23.
Read in Russian | Читать по-русски
By

The Sevmash yard by the White Sea now has more than 30,000 employees engaged in the construction of nuclear-powered submarines, mainly the new multi-purpose submarines of the Yasen class and the 4th generation ballistic missile subs of the Borei class.

On Monday, the solemn ceremony for “Dmitry Donskoy” and “Knyaz Potemkin” was attended by both Navy Commander Nikolai Evmenov and Northern Fleet Commander Aleksandr Moiseev. President Vladimir Putin and Defense Minister Sergei Shoigu attended via video-link from the Patriot Park near Moscow.

“We cherish the glorious traditions of the Russian Navy, preserving the succession of the continuous Russian history that goes back centuries. This is why the two new nuclear-powered cruiser submarines will be named “Dmitry Donskoy“ and “Knyaz Potyomkin”, as a tribute to the memory and heroism of our outstanding ancestors,” Putin said.

President Putin has always had a special heart for the navy and the Northern Fleet has in the course of the last decade been given high priority as Russia’s defense spendings have increased substantially. New submarines, high-tech weapons systems, and comprehensive exercises also in waters outside the Northern Fleet’s core areas in the Barents Sea are today the new normal.

“We will continue to develop Russia’s naval potential, improve the naval base system and the fleet infrastructure, fit out the ships with the most advanced weapons and equipment, provide training for complicated battle missions during drills and long-distance voyages, and “demonstrate” the Russian flag in strategically important areas of the world ocean,” the President said in the video-link to Severodvinsk.

Additional to the two ballistic missile subs at the Sevmash yard, similar keel-laying ceremonies for two diesel-electric Kilo-class subs, as well as two corvettes, took place at the Admiralty shipyard in St. Petersburg and the Amur shipyard in Komsomolsk-on-Amur.

Each of the new Borei class submarines will be armed with 16 Bulava ballistic missiles, adding power to the navy leg of Russia’s nuclear deterrence.

The names ”Dmitry Donskoy” and “Knyaz Potemkin” are well known from Russian navy history. “Potemkin” was a battleship in the Imperial Russian Navy becoming famous after a rebellion of the crew against the officers in the 1905 revolution. “Dmitry Donskoy” is the current name of the only remaining operation Typhoon submarines.

Most likely, the current “Dmitry Donskoy”, which only operates as a weapons testing platform, will be taken out of service before the new Borei class with the same name starts to sail for the navy in 2026.

By now, four Borei class submarines are in operation, two with the Northern Fleet and two are sailing for the Pacific Fleet. At the yard in Sevmash, six other subs of the class are at different stages of construction and are expected to be delivered to the navy from 2021-2023. Construction time for the ninth and tenth Borei class submarines is estimated to be 6-7 years.

In the Northern Fleet, all ballistic missile submarines are based in Gadzhiyevo on the Kola Peninsula.

The Barents Observer has previously reported about the current fleet of six Delta-IV class ballistic missile subs that will be taken out of operation as the new Borei class vessels are delivered from the Sevmash shipyard.