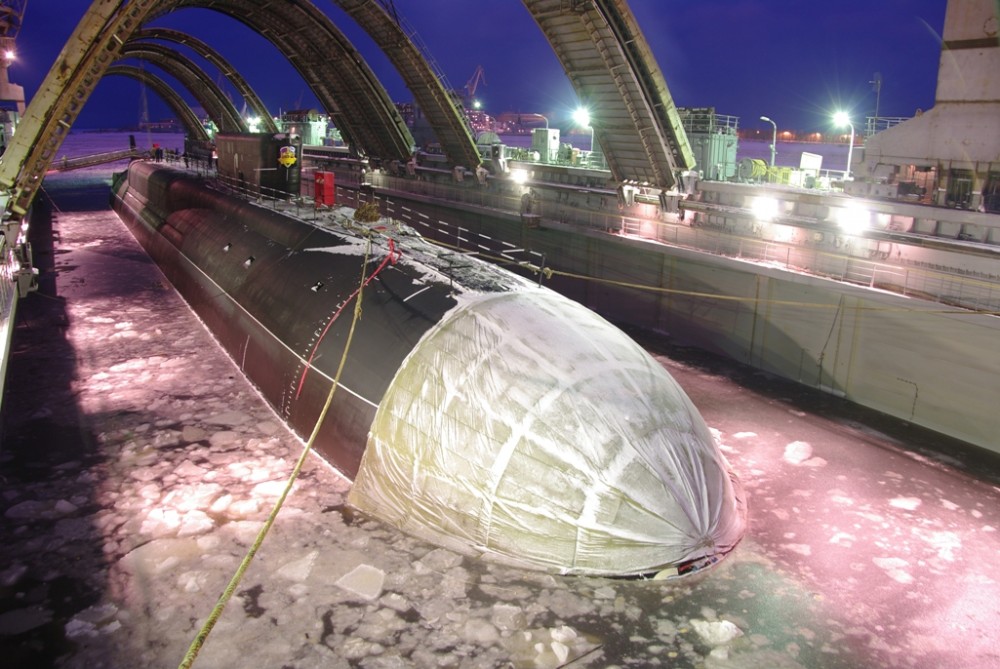 A Borei-class SSBN in the floating dock. Photo: Sevmash shipyard

Russia's construction of nuclear-powered submarines hits post-Soviet peak. 15 sub are currently at different stages of readiness at the shipyard in Severodvinsk.
Read in Russian | Читать по-русски
By

22-year-old Julia Kalach became employee No. 30,000 when she earlier this month got a job as design engineer at Russia’s largest shipbuilding enterprise, the Sevmash, on the shores of the White Sea.

Welcoming Julia to the team, Deputy Director for Personnel Management, Vladimir Syrodubov, said “the 30,000-strong team was the task given for this year.” With that, the shipyard can successfully complete the state defense order, the press service of Sevmash informs.

The order is outlined in the State Armament Programme for the ten-year period 2018 to 2027.

Sevmash is the only shipyard in Russia that builds nuclear-powered submarines. During Soviet times, the yard then known as Shipyard No. 402, built a total of 128 nuclear subs. Most of them, including five of the six giant Typhoons, are now taken out of active service and decommissioned.

In the 1990ies, the labor force at the yard worked in a mode of slow-motion.

One of the few new-buildings at the time was K-560, the first Yasen-class submarine named after the city itself, Severodvinsk. Construction started in 1993, but the vessel was first handed over to the navy 20 years later, in December 2013. Three years later, in 2016, the sub was declared combat ready.

Long-delayed, but today the Severodvinsk is the most advanced and heavily armed multi-purpose submarine in the Russian navy. When sailing on missions out from her homeport in Zapadnaya Litsa, NATO eyes are on special watch to track her movements in northern waters.

In post-Soviet days, the Sevmash has commissioned four other nuclear-powered submarines, additional to the Severodvinsk; the SSBNs Yury Dolgorukiy, Aleksandr Nevsky, Vladimir Monomakh and Knyaz Vladimir.

Next multi-purpose submarine in pipe for the Navy is the first serial production Yasen-M class, the Kazan, expected to be handed over to the Northern Fleet in March 2021. In late November, the Kazan successfully fired a Kalibr cruise missile from the White Sea.

The launch was part of final state tests needed before the navy will accept taking over the submarine from the Sevmash yard.

The Kazan marks a new era for underwater warfare as it sails more quiet than any previous Soviet/Russian made submarines.

In the course of the next seven years, the shipyard by the coast of the White Sea will float out submarines of another speed, with technology and new weapons, that will dramatically impact the global power balance at sea.

A review by The Barents Observer of currently available open source information shows that Sevmash has at least 15 nuclear-powered submarines currently under construction.

The Kazan will be followed by seven Yasen-M class submarines, with the last to be commissioned in 2027 according to the State Armament Programme. All seven are already laid down and at different stages of construction. Five of class will sail for the Northern Fleet, based on the Kola Peninsula.

Aimed at replacing the current ballistic missile submarines, the Delta-III with the Pacific Fleet and the Delta-IV with the Northern Fleet, four additional Borei-A class are scheduled for commissioning by 2023.

One submarine of special interest soon to be commissioned for active duty is the Belgorod (K-329). The sub is built on the hull of an Oscar-II class, although made longer, in order to carry special underwater equipment for military installations and operations on the Arctic shelf. Onboard are supposedly also room for Russia’s new nuclear-powered, nuclear-armed, underwater drone, the Poseidon. Belgorod will sail for GUGI, the Main Directorate of Deep-Sea Research based in Olenya Bay on the Kola Peninsula and in Severodvinsk where the Poseidon drones are brought out to sea for testing.

Another nuclear-powered submarine under construction at Sevmash, surrounded by secrecy, is the Kabarovsk. The sub will soon be floated out from the shop to the waters at the shipyard, but it is unclear when she will be handed over for active duty. Khabarovsk is the first of what is believed to be three pr four vessels of the class, all supposedly aimed at carrying several of the Poseidon nuclear-powered drones.

In the longer run, but not yet laid-down, are three more of the Yasen-B class and probably two more Borei-A class submarines. Design work for the fifth generation nuclear-powered submarines are under way, but no dates are yet set for construction start.