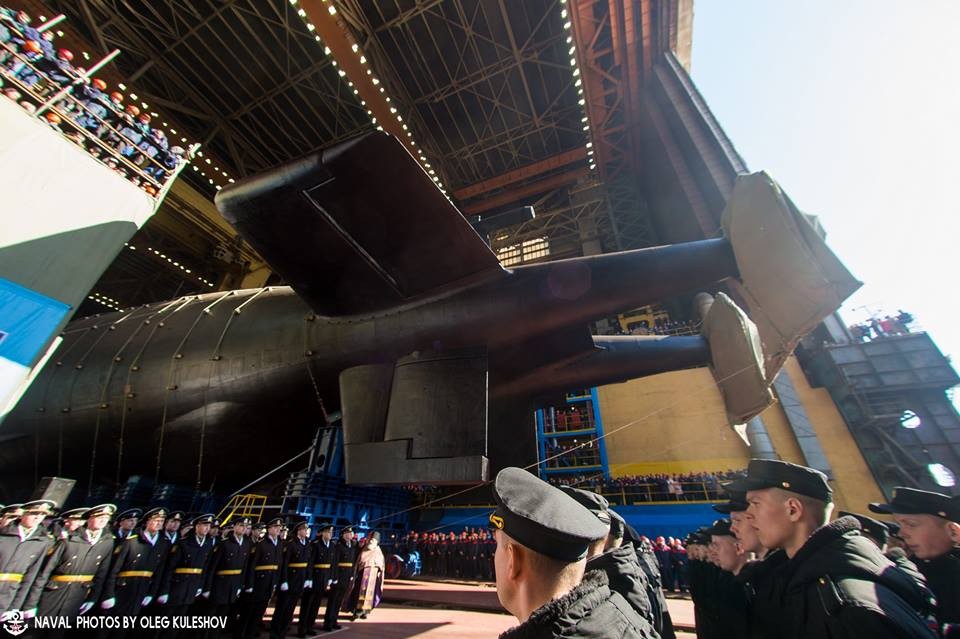 "Belgorod" was taken out of the shiphall at Sevmash yard on April 23 in a solemn ceremony. Photo courtesy of Oleg Kuleshov

Built for special missions, “Belgorod” can carry deep-sea equipment like nuclear reactors to the Arctic seabed, as well as deploying the Poseidon second nuclear strike drone.
Read in Russian | Читать по-русски
By

It was indeed a very special Tuesday at the Sevmash yard in Severodvinsk on Tuesday. One of Russia’s most secret weapons carrier, a 184-meter long nuclear-powered submarine with the project-name 09852 was launched.

The Barents Observer has been allowed to republish photos from the ceremony, taken by local photographer Oleg Kuleshov.

The “Belgorod” (KS-139) is believed to have four to six tubes aimed for the Poseidon nuclear-powered, nuclear armed underwater drone, a weapon that came as a surprise when it first was confirmed in President Putin’s annual State of the Federation speech in March last year.

Today, Putin followed the ceremony via a TV-link from the Severnaya yard in St. Petersburg where he took part in the ceremonial laying of two new frigates for the Russian navy, the “Admiral Amelko” and “Admiral Chichagov”.

“Belgorod” is built on a prolonged hull of what was originally meant to be an Oscar-II class multi-purpose submarine, a sister vessel to the ill-fated “Kursk” submarine that sank in the Barents Sea during a naval exercise in August 2000.  The hull of the submarine was laid down in 1992, but it was first twenty years later, in 2012, that the Defense Ministry decided to use the hull to construct this giant special purpose vessel.

The extra space in the prolonged hull has room to carry equipment for deep-sea operations, like small-sized nuclear-reactors aimed to provide power to secret military installations on the Arctic Sea bed.

Expert on Russian nuclear submarines, H. I. Sutton, suggests in a blog post on the portal Covert Shores that one of the secret missions for “Belgorod” will be the covert placement of large underwater systems, like the new multi-sensor submarine detection network named “Harmony”. Similar to NATO’s SOSUS cable system, the Russian network with sensors is aimed to detect enemy submarines. “Harmony” will be powered by nuclear reactors that will be placed on the Arctic shelf by “Belgorod”.

The submarine will also be able to carry other special purpose mini-submarines, like those based in Olenya Bay on the Kola Peninsula where Russia’s Main Directorate for Deep Sea Research, nicknamed GUGI, is located.

Although the crew on the Directorate’s submarines are from the Northern Fleet, these special submarines are operated directly by the General Staff of the Armed Forces. So also for “Belgorod”.

As reported by the Barents Observer in March when Russia’s Defense Minister Sergey Shoigu visited the yard in Severodvinsk, “Belgorod” will be the first full-time carrier of the Poseidon underwater drone.

The 24-meters long torpedo-looking drone is powered by a small nuclear reactor and is designed as a second nuclear strike weapon. If an enemy targets Russia with nuclear weapons, the Poseidon will guarantee retaliation. Launched from “Belgorod” the drone with tipped with a multi-megatons nuclear warhead can cross oceans like the North Atlantic at a depth and with a silence making it impossible to stop.

Poseidon will be a game changer for global nuclear deterrence when it becomes operative.

News agency TASS reports from the ceremony in Severodvinsk on Tuesday that “Belgorod” now will make mooring tests, launch the two reactors, and start sea trails in 2020, after which it will be delivered for operations by the end of that year.

According to Kremlin’s transcripts of Putin’s speech at the naval yard in connection with the solemn ceremonies in St. Petersburg, Kaliningrad and Severodvinsk on Tuesday, the President stressed the need for deadlines to be met.

“I expect that the construction deadlines will certainly be met. This is of fundamental importance for the implementation of large-scale plans to strengthen the fleet, for reliable defense of the sea borders of Russia, protection of our interests in the World Oceans, in both the near and far-away waters zones,” Putin said.

… We hope you fond this article informative.
Support independent, nonprofit journalism. For 16 years, the Barents Observer has provide serious, fact-based journalism and stories from the Barents region and the Arctic. Please help us continue to be a voice for freedom in the borderland to Russia. You can give a small support here.

Video: Russian bombers outside Norway for second time in a week