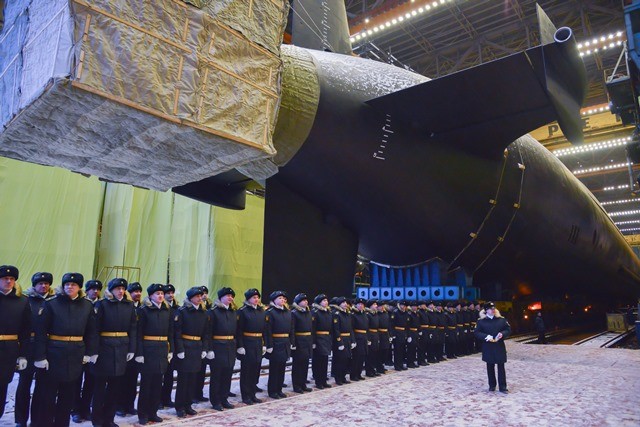 The "Generalissimus Suvorov" was taken out of the ship hall in Severodvinsk on December 25. Photo: M. Vorkunkov / Sevmash

The country has not commissioned this many ballistic missile submarines since 1991, said Navy Commander Nikolai Evmenov at the ceremony at the Sevmash yard on December 25.
Read in Russian | Читать по-русски
By

The “Generalissimo Suvorov” is the sixth vessel of Russia’s 4th generation ballistic missile submarines and the third of the upgraded Borei-A class.

Like it was in Soviet times, late December is again becoming busy days for the submarine yard on the shores of the White Sea. The goal is to fulfill promised state orders as scheduled before the year’s end. Earlier this week, two nuclear-powered submarines were handed over to the navy. Now, a new big submarine is taken out of the ship-hall and launched during a solemn ceremony attended by high-ranking officials.

After being put on water, the “Generalissimo Suvorov” will be made ready and later start sea trials. If all goes according to plan, the commissioning and hand-over to the navy will happen before the end of December 2022.

“This is our strategic argument. Nuclear submarine cruisers are protecting our country, ” Commander-in-Chief Nikolai Evmenov said at the ceremony, according to the news update from Sevmash shipyard.

“The country has not commissioned this many ballistic missile submarines since 1991,” he added.

It was the commander of the new submarine, Captain 1st Rank Viktor Artyomov, that was honored to smash the bottle of champagne in the side of the ship.

The submarine is named after Aleksandr Suvorov (1730-1800), said to be one of the greatest military commanders in Russian history and a Prince of the Russian Empire who allegedly never lost a single battle he commanded.

A total of 10 Borei-class submarines will be built. So far, five of them are delivered.

When all are delivered by 2027, they will be the backbone of Russia’s navy nuclear deterrence and replace the out-going Delta-III subs in the Pacific Fleet and the Delta-IV subs sailing with the Northern Fleet.

The “Generalissimo Suvorov” will be part of the Pacific Fleet, Commander Evmenov said in his speech.

With both “Generalissimus Suvorov” and “Knyaz Oleg” now being confirmed for the Pacific Fleet, that contradicts previous speculations that at least one of the coming Borei-A class subs would be redirected to the Northern Fleet.

Each of the 170-meters long Borei-class vessels can carry 16 Bulava missiles, said to have an operational range of more than 8,000 kilometers. Each missile can carry six nuclear warheads.