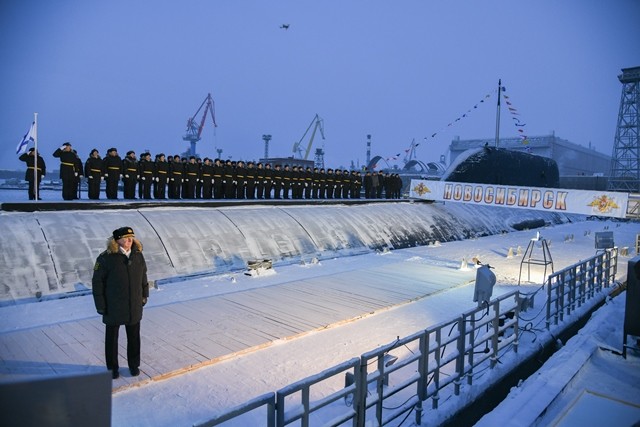 The "Novosibirsk" is the third Yasen-class multi-purpose submarine in Russian navy. Photo: Sevmash

It was at the expanded meeting of the Collegium of the Defense Ministry Putin came with strong warnings to NATO.

“In the event of continuation of the obviously aggressive line of our Western colleagues, we will take adequate retaliatory military-technical measures, and react toughly to unfriendly steps,” the president said in his speech to the Collegium.

He made clear that Russia has every right to take action to ensure the country’s sovereignty.

Putin went on by listing the many modern weapons currently being deployed in the armed forces, including in the navy. Transcript of Putin’s speech is posted at the portal of the Kremlin.

In a video link from the Defense Ministry Collegium in Moscow, President Putin and Defense Minister Sergei Shoigu later on Tuesday participated at the ceremony in Severodvinsk where the Sevmash shipyard handed over its two newest nuclear-powered submarines to the navy.

“The new submarines have a formidable striking force,” Putin said in his congratulation speech to the shipyard and navy.

The two new submarines are the “Novosibirsk” and “Knyaz Oleg”.

While the “Novosibirsk” is a Yasen-class multipurpose submarine, the “Knyaz Oleg” is a ballistic missile submarine. Both are top-modern 4th generation nuclear-powered vessels.

Putin, who himself has a special heart for the navy, praised the strike capabilities of the new subs.

“Knyaz Oleg is equipped with Bulava ballistic missiles, and the multipurpose submarine cruiser “Novosibirsk” - with Kalibr cruise missiles and is capable not only of effectively fighting naval targets, but also of delivering high-precision strikes against ground targets. In the near future, “Knyaz Oleg” and “Novosibirsk” will join the Pacific Fleet and significantly increase its combat potential,” Putin said according to the transcript posted by Sevmash shipyard.

The «Knyaz Oleg» is the fifth submarine of the Borei class now in service. Another five are still at different stages of construction at the Sevmash yard. When all are delivered, the Borei class will be the backbone of Russia’s navy nuclear deterrence. Each of the vessels can carry 16 Bulava missiles, said to have an operational range of more than 8,000 kilometers. Each missile can carry six nuclear warheads.

During test-sailings this autumn, the “Knyaz Oleg” test-fired a Bulava missile from the White Sea towards a target on Russia’s Kamchatka Peninsula in the Far East.

The «Novosibirsk» is the third vessel of the Yasen class. Another six similar submarines are under construction and is scheduled for delivery from 2022 to 2028.

“This is just the beginning and Sevmash,” the deputy minister stated.